The woman who accused Attorney-General Christian Porter of a 1988 rape told NSW police in an email she did not want to proceed with her claim against him in the days before her death for personal and health reasons.

A statement released by police on Thursday detailed how the woman initially met with detectives from the Child Abuse and Sex Crimes Squad on February 27, 2020 with a friend to support her, and their contact from then until her death later in the year. 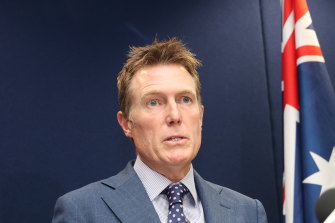 Police said the woman told the detectives she had a number of health issues.

“She also advised investigators that she dissociates and wanted to ensure when supplying her statement that she was ‘coherent and as grounded as possible’,” the police statement said.

Investigators spoke to the woman at least five times over the next few months and, police said, discussed the support she had from a partner, friends, family and professionals.

On June 23, the woman emailed police saying she did not want to proceed with the allegations for personal and medical reasons. NSW police responded the next day and on the 25th were told by South Australian police the woman had died.

NSW Police on Tuesday said it had closed its investigation into the woman’s allegation she was raped by Mr Porter in 1988. SA Police are investigating her death on behalf of the coroner.

Mr Porter denied the allegations against him on Wednesday. “It just did not happen,” he said.

He hit out at the media, saying he had not been supplied with a full copy of the allegations, which were sent anonymously in the form of the woman’s unsworn statement to the Prime Minister’s office and other politicians last week. They were then passed to police.

“Providing a version [of the alleged victim’s accusations] to a suspect prior to obtaining a formal statement would have an impact on any future investigative strategies,” NSW police said in their statement.

Once a full statement has been provided to police, then the allegations “can and should be provided to the person of interest as per the procedural fairness principles for investigators, to be able to determine prima facie and whether charging of the person is appropriate”.

Several of the woman’s friends have called for an independent investigation into the claims she made before her death.

‘The Outside Dog’ & ‘The Hand of God’ Review: Kristin Scott Thomas Stars in Socially Distanced Staging