Trump: Colin Kaepernick should be given a 2nd shot

President Trump says if Colin Kaepernick can perform well on the field, he should be given another chance to play in the NFL.

Kittle joined the 49ers in 2017, one year after Kaepernick, the franchise’s former starting quarterback, drew international scrutiny for his role in leading player national anthem protests against police brutality. While Kaepernick hasn’t played in the NFL since 2016, calls for his return have intensified in recent days after NFL Commissioner Roger Goodell encouraged teams to sign him.

“Colin led the 49ers to a Super Bowl and he was a great quarterback,” said Kittle, who spoke to FOX Business on behalf of Gatorade’s “Beat the Heat” campaign. “I never played with him, but I watched him play and he was a great player. I think what he talks about and his stance on everything, I love that he voices his opinion. He’s someone that’s dealt with it, he’s been doing it for the last four years.” 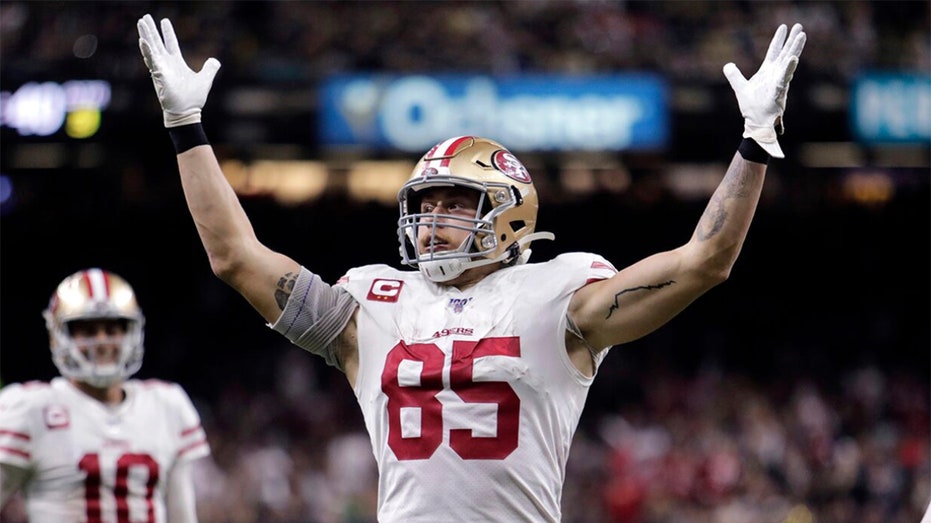 Kaepernick entered the NFL in 2011 and led the 49ers to a Super Bowl appearance after taking over as the team’s starter midway through the 2012 season. Once considered a rising NFL star, Kaepernick struggled to replicate his success in subsequent seasons. He went just 3-16 as a starter during his last two years in the NFL.

TRUMP: KAEPERNICK SHOULD GET NFL CONTRACT OFFER 'IF HE DESERVES IT'

Kaepernick went unsigned after opting out of his contract with the 49ers in early 2017. He filed a collusion grievance against the NFL that fall, accusing the 32 team owners of conspiring to keep him off the field due to his role in the protests. The two sides reached a settlement in February 2019. Tensions resumed last fall after Kaepernick backed out of an NFL-scheduled tryout over concerns related to a waiver he was asked to sign.

A prominent social activist, Kaepernick remains a divisive figure in the sports world. He generated renewed scrutiny earlier this month after he referred to the Independence Day holiday as a “celebration of white supremacy.”

As nationwide demonstrations against racial injustice swept the country, Goodell said the NFL had mishandled the player protests led by Kaepernick. The NFL renewed its commitment to social justice with a $250 million pledge to support key causes.

Kittle said the 49ers have discussed social justice issues as a team in recent weeks.

“My team has done a great job. We’ve had discussions with veterans and with the whole team, we’ve had talks during our Zoom calls and stuff during the offseason meetings,” Kittle said. “I think [49ers head coach Kyle Shanahan] said it best – I wish everyone could see how our team interacts with each other because it’s just like a bunch of kids out there, just trying to have fun and play football.”

He caught 85 passes for 1,053 yards and five touchdowns and was named a first-team All-Pro Selection. Pro Football Focus ranked Kittle as the NFL’s best player in 2019.

“He’s a heck of a football player, so if he’s on the field, it’s because he deserves to be,” Kittle added regarding Kaepernick's potential return.

Opinion: The truth can be scary for college coaches, but progress is already happening

2.25 Royal Ascot racecard and tips: Who should I bet on in the Jersey Stakes?