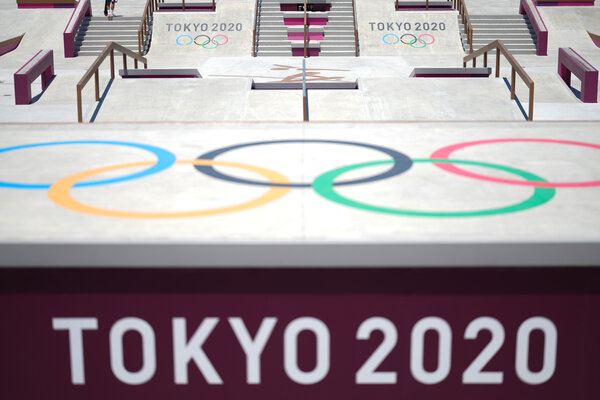 TOKYO — The women take the stage in skateboarding on Monday at Ariake Urban Sports Park, and the international contest could end up a Brazilian affair. It could also be historic one, as one of the gold-medal contenders is just 13 years old.

A podium sweep is a possibility, though the 20-skater talent pool is deep. And as we saw on Sunday, with Nyjah Huston finishing seventh in the men’s street, the Olympics do not always care who is favored.

But Brazil has three of the best street skaters in the world, a range of talent and exuberance, experience and youth, that highlights exactly what the Olympics hope skateboarding will bring.

Leticia Bufoni, 28 is one of the most famous skaters in the world, and won her sixth X Games gold medal this month in California.

Pamela Rosa, 22, won the world championship in 2019, and has a collection of other big-event trophies.

And Rayssa Leal, at 13, could become the youngest gold medal winner in Summer Olympic history. (The youngest to achieve that feat in the Winter Olympics is the short-track speedskater Kim Yun-Mi of Korea, who was 13 when she won a relay event in 1994.)

Leal attracts a lot of attention for her youth, her talent and her joy. Her Instagram posts have been known to go viral, like the one of her skating a few years ago in a fairy costume, which was shared by Tony Hawk. A few days ago, she posted a photograph of herself with Hawk, an example of how skateboarding works hard to stay true to its roots and honor its history.

In the communal world of skateboarding, the Brazilians act like a true team, a bit of a family, with Bufoni as the supportive older sister and role model. No matter which one of them wins gold — and one of them probably will — the others will be there, in full support.

But there are plenty of athletes who might disrupt the possible Brazilian domination. Japan’s Aori Nishimura and Momiji Nishiya are among the likeliest, and may be inspired by the gold medal performance of Tokyo’s Yuto Horigome just 24 hours earlier. Keet Oldenbeuving of the Netherlands, 16, could also leap to the medal stand.

The United States, too, has a competitive mix, featuring Alana Smith, Mariah Duran and Alexis Sablone, the 34-year-old who lives in Brooklyn. Sablone once dominated street contests, winning the X Games and other big contests over the course of several years. A pioneer of the sport, she has watched those inspired by her pass her on the leader boards, but maybe she has another big-time performance left.

This is the debut of skateboarding at the Olympics, and there are two distinct disciplines: street and park. Street, today’s event, is a playground of stairs, rails and short ramps, meant to simulate something like a schoolyard or an office park. There are no compulsory moves. Athletes will perform two 45-second runs and five single tricks, and each will be judged on a 10-point scale.

The four best scores will be added together. A perfect score would be 40.

No one will get a perfect score. But you might expect a Brazilian or three to get closest.

Harry Maguire appears to admit he COULD be stripped of captaincy