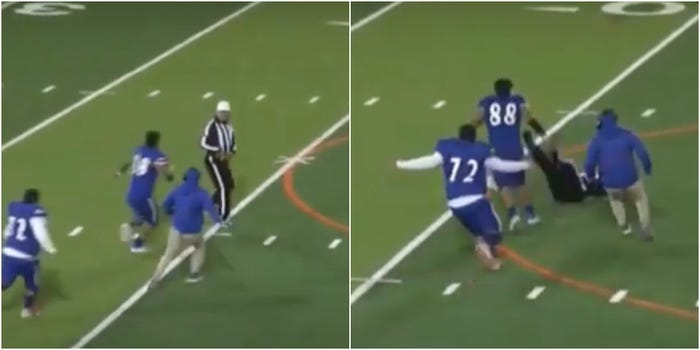 A shocking video shows the moment a Texas High School football star ran back on to the pitch and attacked the referee after being ejected from a game.

Edinburg High defender Emmanuel Duron sprinted from the sideline toward the referee after the official had disqualified him in the 2nd quarter for a late hit on an opposition player from PSJA High School.

Duron slammed directly into the referee at full speed. The official fell to the floor and remained down while the Edinburg defensive lineman was dragged away by teammates and coaches.

Video of the incident was posted online, and can be seen below:

The Monitor, a local newspaper in McAllen, reports that Duron was escorted away from the Richard R. Flores Stadium by police, while the referee was evaluated in an ambulance for concussion symptoms.

Andrew McCulloch, a reporter for The Monitor, spoke to Edinburg's coach JJ Lejia after the game, but Lejia said he could not share any more information about the incident.

"I can't release any information on that and I apologize for that," he said. "I hope you understand. I want this to be about our program and all the other kids we had on the field tonight."

It is unclear whether Duron, who was the district's Defensive Player of the Year last season, will face criminal charges for the attack.

The Monitor reports that Duron was previously suspended for a similar incident against Edinburg Vela, a crosstown rival, last season.