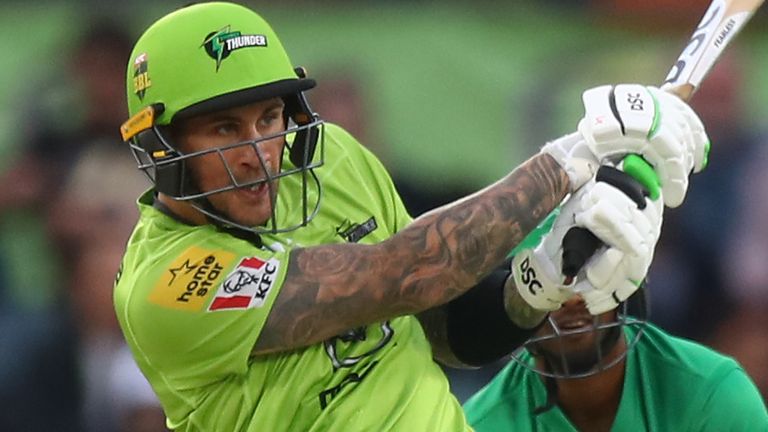 The Nottinghamshire batsman had recorded back-to-back ducks before Christmas but after a 21-ball 35 against Melbourne Renegades on Boxing Day, he was in swashbuckling form against Stars in a 75-run victory for his side.

Hales completed the fastest Big Bash fifty by a Thunder batsman – from 21 balls – with a huge six off Adam Zampa after he opened the batting for his team at Manuka Oval in Canberra.

The 31-year-old was eventually caught and bowled by Stars’ Nic Maddinson in the eighth over but not before posting the highest score by an English-qualified player in the Big Bash this season.

James Vince (Sydney Sixers) and Phil Salt (Adelaide Strikers) are the other English stars to have passed fifty, with Hampshire man Vince scoring 67 in the first game of the campaign against Hobart Hurricanes and Sussex player Salt hitting 51 against Perth Scorchers on Monday. Thunder’s total of 219-7 – in which skipper Callum Ferguson scored 51 – was also the highest team score of the season so far, beating the 209-8 they had scored against Renegades on Boxing Day.

Stars could get nowhere near Thunder’s score on Tuesday, with Glenn Maxwell’s side shot out for 144 in 19.5 overs – Thunder spinner Chris Green taking 4-34 and Maxwell and Zampa top-scoring for Stars with 23 runs apiece.

Thunder are one point behind Sixers at the top of the standings after five matches, with Sixers having accrued one more batting point than their city rivals. Sixers saw off Renegades in a thriller at Metricon Stadium on Tuesday, with Jason Holder hitting three boundaries in a row, including the match-winning six, off Will Sutherland as his side triumphed with one ball to spare.

Sixers were chasing 169 to win and looked in trouble after Kane Richardson’s two-wicket and five-run 19th over left them needing 16 from the last over with two wickets in hand.

That became 14 from four balls but West Indies Test captain Holder (33no off 18) then smashed Sutherland for successive fours over mid-off and then a six over long-off.