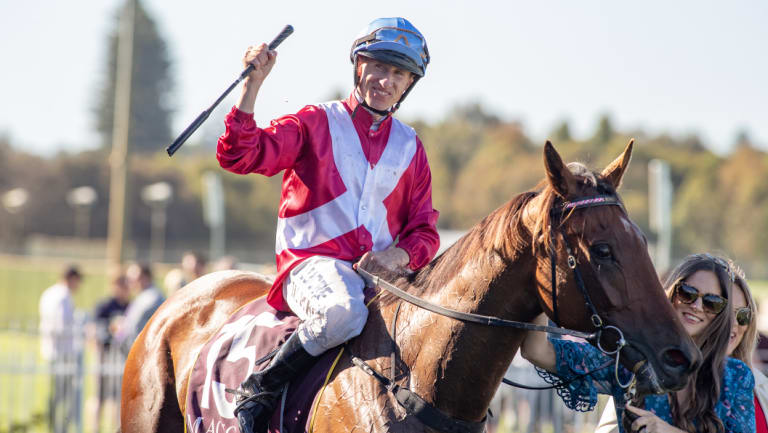 William Pike on Arcadia Queen after saluting the judges in the Kingston Town Classic.Credit:AAP

The Kingston Town Classic at Perth's picturesque Ascot racecourse is the last group 1 race of the year.

And it's just possible – Winx aside, of course – that WA racegoers saw one of the best group 1 winners of the year.

Arcadia Queen announced herself as a potential big-time player on the eastern seaboard next year for the rich prizes on offer in Melbourne and Sydney after she simply destroyed her rivals in one of their home state's greatest races.

Victories for the cerise and white colours of Bob Peters worn by jockey William Pike on gallopers trained by Grant Williams are a familiar sight in Perth.

But they are rarely as impressive in such a big event – a million-dollar weight for age race – as that posted by the daughter of Pierro on Saturday.

With the minimum of urging from the WA champion rider, Arcadia Queen swooped on her rivals to gallop to a four-and-a-half lengths victory over the tough, admirable gelding Material Man and her stablemate Galaxy Star, who had won the group 1 Railway Stakes (with Material Man third) at her last start. The form looks to be rock solid. 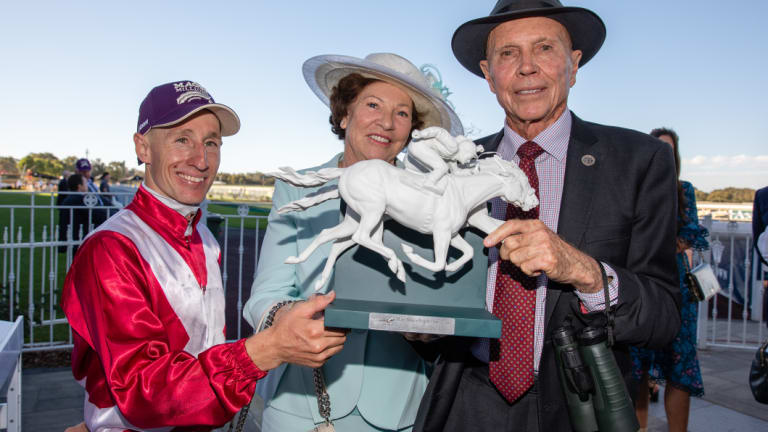 Peters is the biggest thing in WA racing by some margin and he has been winning major events in Perth for decades.

But even he was taken aback the performance of a filly who has now won the Champion Fillies Stakes, the WA Guineas and the Kingston Town at her last three starts.

''Its just nice to win the race again. Its nice to win it with a filly, especially one having her first preparation.

''I always thought Old Comrade was the best, he won it as a three year old and then went on and won four group 1s. She's probably done more than he had done at this stage.

''We have won the race five times, and I would say that was the best win I have seen. It's her first preparation, and it's very unsual. We thought she was the best filly we had, and she's certainly lived up to that.''

Peters also owned the other three-year-old filly to have won this race, Perfect Reflection.

So would he be tempted by the All Star Mile or the new Eagle race worth $7.5 million in Sydney.

''It's exciting. They tell me you can use Regu-Mate in NSW too,'' said Peters.

''It makes it a bit easier than thinking about going to Victoria where you can't use it.''

Pike was also blown away by the ease of the victory.

''I was checking over my shoulder.. I got there so easy and so early, once I let her go what a beautiful horse.''

Victorian jockeys had a good afternoon through the rest of the card.

Melbourne based West Australian Damian Lane landed an early double, taking out the opening event on Market Ruler for Simon Miller then scoring comfortably on the grey Candlelight Star in the Vale Bill Doughty Handicap.

And Dean Yendall, like Lane so often associated with runners from the Darren Weir camp, made every post a winning post in the 2200 metre Towton Cup aboard the Fred Kersley trained Cappo D'Oro.

''I have never ridden a winner here before,'' said Yendall.
''I rode Santa Ana Lane here last year (in the Winterbottom Stakes) and I had a couple of seconds. That was as close as I got.''
'

‘I can adapt’: Tina Charles’ journey from Phoenix to Seattle to the WNBA semifinals