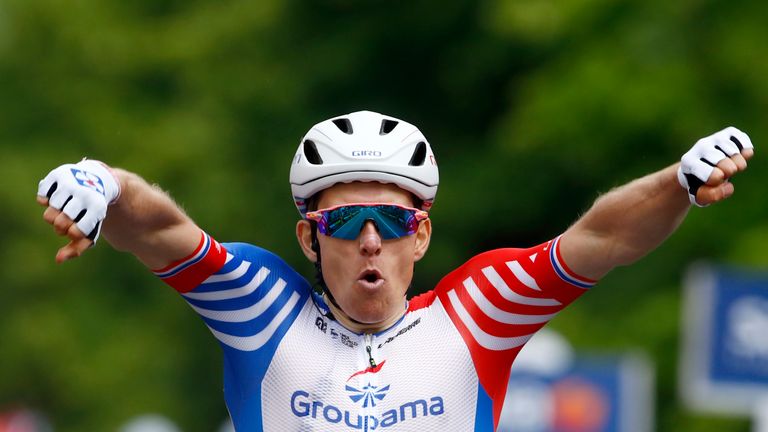 Arnaud Demare claimed his first win of 2019 with victory on stage 10 of the Giro d’Italia in Modena on Tuesday.

The Frenchman held off Italian national champion Elia Viviani and Rudiger Selig in a reduced sprint after a crash under the flamme rouge brought down several riders, including Bora-Hansgrohe’s sprinter Pascal Ackermann in the points leaders’ ciclamino jersey.

With only a handful of riders left to contest stage honours, Groupama-FDJ’s Demare launched his sprint on the left while stage eight winner Caleb Ewan raced down the right.

Deceunick-QuickStep’s Viviani, running out of opportunities to win a stage of this race in the Italian jersey, looked to come through the middle and though he and Ackermann’s team-mate Selig rounded a fading Ewan, Demare had the power to hold them off.

Ackermann eventually crossed the line some minutes later surrounded by team-mates with his jersey and shorts badly ripped and facing some uncomfortable nights’ sleep in the week to come, though with the crash coming inside the final three kilometres he suffered no time loss.

That meant no change at the top of the general classification as UAE Team Emirates’ Valerio Conti retained his one minute 50 second lead over Team Jumbo-Visma’s Primoz Roglic, the race favourite.

The 145km stage from Ravenna, almost entirely flat, was the penultimate chance for the sprinters in this Giro with the last coming on Tuesday’s 220km stage from Carpi to Novi Ligure, and that only added to the tension in the peloton in the final kilometres.

CCC’s Francisco Ventoso launched an ambitious solo attempt, peeling off the group with three kilometres as they came into town, but as the Spaniard was caught under the flamme rouge Ackermann appeared to touch wheels with the rider in front of him and hit the deck, which sparked chaos.

For much of the day it had been calm, almost an extension of Monday’s rest day as they took it easy on the flat roads, allowing Luca Colivi (Bardiani) and Sho Hatsuyama (Nippo-Vini Fantini-Faizane) to go clear in a token breakaway before upping the pace on the run into town.

Things were always going to heat up then however with many of the sprinters not in contention for the points classification expected to pull out of the race after Tuesday’s stage.

Viviani is among those rumoured to be packing his bags, but he now only has one more chance to claim a win after being relegated from victory once and collecting three second places.

This was not a stage to mix up the general classification following the thorough shake it received in Sunday’s time trial.