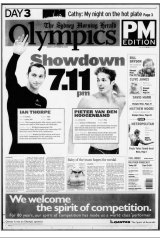 The front page of the SMH anticipating the showdown between Thorpe and Hoogie.Credit:SMH

And so with both Ian Thorpe and Pieter van den Hoogenband impressing in the preliminary rounds the stage was set for a big 200m freestyle final. This is how the Herald reported day two of the Sydney Olympics.

Thorpe to advance to finals

All eyes were on Ian Thorpe on day two at the pool. The 400m champion advanced to the 200m freestyle finals. Thorpe qualified second fastest behind Dutch star Pieter van den Hoogenband, who set a world record, in what will be a match race for the ages on night three of competition. There is hope Australia can take the 200m double when Susie O'Neill steps out tomorrow. She will be favourite in her freestyle event, even if she considers it a supplementary race to her butterfly.

Grant Hackett will be another to watch in the 200m final as he goes through the gears ahead of his much-anticipated showdown with Kieren Perkins over 1500m towards the end of the Olympic meet. 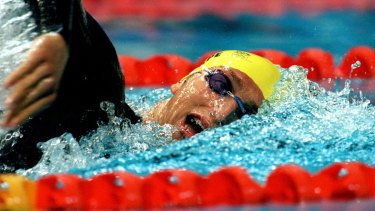 Ian Thorpe has set up a match race with Pieter van den Hoogenband in the 200m freestyle final.Credit:Getty

He's done it again. Michael Diamond has defended his Olympic trap crown and it was never in doubt. Diamond was in brilliant touch to win by five targets (147) over Great Britain's Ian Peel (142), who took silver ahead of Italy's Giovanni Pellielo (140).

Diamond was highly emotional afterwards, dedicating the victory to his late father Constantine, who introduced him to the sport when he was just six. He had been his coach and this was the first major tournament without him watching on and supporting.

"I was thinking of my father, wishing he could be here, but he can't," Diamond said. "I'm sure he would have been proud. I'm sure he's watching from wherever he is."

Diamond's victory sent the crowd at the Cecil Park range into what was described as a 'carnival atmosphere'. Diamond estimated half of those with tickets were supporters from his proud home town of Goulburn.

A bronzed evening at the Dunc Gray Velodrome

Sydney's Brad McGee has produced one of the rides of his life to capture bronze in the 4000m individual pursuit at the Dunc Gray Velodrome. McGee was in a medal ride-off with Great Britain's Ron Hayles and clocked a personal best time of 4:19.25s to ensure he was able to step onto the podium in front of his home crowd.

It was a brilliant effort for McGee, a bronze medallist in this event in Atlanta four years ago, considering he broke his collarbone in a fall at the end of August. He was able to ride through the pain and the smile at the end was worth the grimaces. 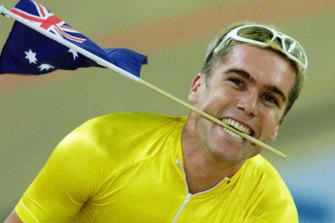 Gold went to Germany's Robert Bartko, who beat Swiss star Jens Lehmann to the top of the medal dias.

There was another bronze at the Velodrome as well, with Gary Neiwand, Sean Eadie and Darryn Hill beating out Greece in the ride-off in the team sprint. France took gold ahead of Great Britain.

Joy for the Canadians as they take triathlon gold

Take a bow Simon Whitfield. The Canadian was almost overwhelmed by emotion when he realised the Olympic triathlon crown was in his keeping thanks to a brilliant sprint finish.

Heading into the final stages of the run leg, he stalked Germany's Stephan Vuckovic before making a lightning move with just a few hundred metres left to run. Whitfield had plenty in his legs and the German was spent … by the time Whitfield sailed right past he knew it was over.

He pumped his fists as he neared the line as he took the gold, while Vuckovic found a German flag and was ecstatic with silver. Jan Rehula from the Czech Republic took bronze.

Dutch star Inge de Bruijn has set the pool alight with a world-record swim to claim gold in the 100m butterfly. It was an emotional triumph for the 27-year-old, who didn't swim in Atlanta through a lack of motivation and was booted off the team by boyfriend and coach Jacco Verhaeren.

Verhaeren was on deck last night to congratulate de Bruijn, who will also swim for gold in the freestyle sprint events. It was her ninth world record since May but the medal around her neck meant far more than the time on the clock. 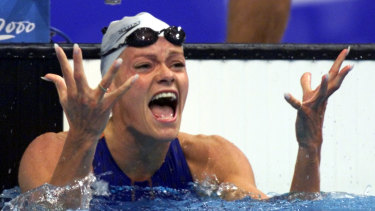 Martina Moracova from Slovakia and the US's Dara Torres shared the minor medals ahead of Australia's Petria Thomas, who just missed out and touched the wall in fourth.

There was double gold for the US with Tom Dolan (400m IM) and Brooke Bennett (400m freestyle), while teenaged Leisel Jones and Tarnee White moved safely into the final of the 100m breaststroke.

How Newcastle could line up with £200m Saudi transfer investment including Griezmann, McGinn and McNeil – The Sun