On the third day of Olympic eventing the Aussies proved why they have taken out team gold so many times before.

With 11 Olympic Games between them, the Australian team took everything in their stride, galloping the 4500-metre course through water obstacles, down embankments and over log fences.

The first Australian rider out was three-time Olympian Shane Rose who completed his round with no penalty points; not an easy feat on a course that had nine riders eliminated, two retire and one withdrawing before it even began. 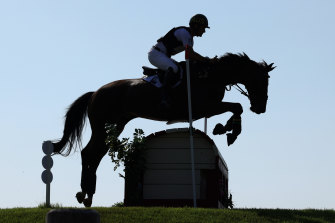 Rose riding Virgil clears a jump during the cross-country eventing on Saturday.Credit:Getty Images

Jessica Rae is a top Australian eventer who works alongside Rose and is hoping to campaign for a spot in the 2024 or 2028 Olympic team. She told The Sydney Morning Herald “the cross-country course really showed who the more experienced riders and horses were […] our three Australian riders are very experienced competitors who have been competing at this level for a number of years”.

That statement rang true for Australian Olympic debutant Kevin McNab who battled his way through the course, galloping at 600 metres per minute, to cross the finish line with a minimal 2.8 penalty points.

The final Australian rider on course was Andrew Hoy, an eight-time Olympian and three-time gold medallist.

So much carnage early on would unsettle most competitors, but Hoy kept his composure, even when forced to stop mid-round due to a fall by Japanese rider Yoshiaki Oiwa. 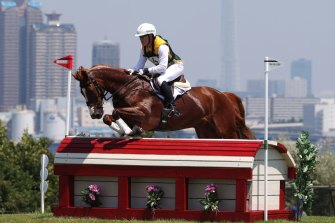 A mid-course delay is extremely disruptive for horse and rider combinations, and with temperatures reaching 37 degrees horses become exhausted the longer they are out in the sun.

“A lot of these competitors are European-based and their horses just aren’t used to such warm climates […] as they get tired they are more likely to make mistakes,” Rae said.

Hoy, who is based in the UK, would have been thinking the same thing, but with enough time for a horse sponge-down he was back on course, speeding along as if nothing had happened. Crossing the finish line under time meant Hoy incurred no penalty points, maintaining second place for Australia.

When asked how Australia could win gold on Monday Rae said the team now needed to complete three clear show jumping rounds to be in with a chance.

“The British team has a strong lead in the competition and will be hard to catch. But if our boys jump clear rounds it will put pressure on the British riders to do the same,” Rae said.