It was supposed to be a victory lap where winning didn’t matter, and averting a catastrophe did. By the time they returned to shore, Mathew Belcher and Will Ryan were being chaired back onto dry land inside their boat after putting the most emphatic exclamation mark on Australia’s easiest gold medal of the Tokyo Olympics.

Belcher, the most successful sailor in Australia’s Olympics history, signed off on his partnership with Ryan in style, giving their rivals a start and a beating to seal the country’s second gold medal of the sailing regatta at Enoshima.

Only a disqualification for a false start or some other unworldly sequence of events in Wednesday’s medal race was going to deny the Australian pair, who had opened up an unassailable lead from the 10 previous races as they plotted revenge from Rio, where they took home silver.

But after charting a conservative course at the start away from the rest of the 10-strong fleet, Belcher and Ryan’s natural instincts kicked in. Who wants recreation when you can race?

And so Belcher and Ryan powered to Australia’s most clinical performance of the regatta, ending with a win they didn’t even need.

Yet there was something symbolic about leading the fleet home the last time in their two-person dinghy, which carries a little plastic taxi from a Kinder Surprise Belcher claims is good luck. 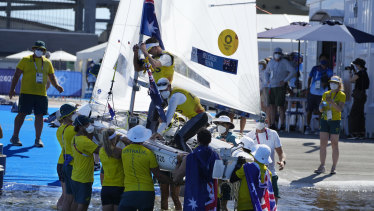 Mathew Belcher and Will Ryan have their boat carried on shore after winning the men’s 470 gold medal.Credit:AP

“I think Mat and I are such competitive people we didn’t not want to win that last race,” Ryan told Seven. “That almost means just as much as the rest of it. That’s everything about our campaign. We started well together and it’s so nice to share it with so many people.”

Said Belcher, who won gold in London with Malcolm Page: “We just couldn’t help ourselves. We were really conservative at the start and just didn’t want to be over [the start line], then we had a sniff in the first half and thought, ‘let’s just go for it’. It was such an amazing feeling.

“I’m so proud and Australia has had so much success in sailing – and to have Malcolm here as well and to do the last 10 years with Will, I’m over the moon. I’m so happy to have the opportunity and perform like we could. I’m so relieved we were able to get this medal.”

Gold Coast’s Belcher and Lake Macquarie’s Ryan won’t be able to campaign together in Paris; the International Olympic Committee’s pursuit of gender equity means their division will switch to a male-female crew in 2024. They’ve won five world titles together, but won’t have another chance for Olympic gold.

It will be a nice way for Belcher to finish his Olympic career if that’s what he chooses, the first Australian sailor to win a medal at three successive Games. Ryan is still undecided about whether he will pursue another gold medal.

“We set a big goal for the three of us after Rio,” said Victor Kovalenko, Belcher and Ryan’s coach. “We weren’t sure whether to campaign again, but we decided to do one more campaign together with that single goal being to win in Tokyo. And we did it.”

Sweden’s Anton Dahlberg and Fredrik Bergstrom finished the 470 medal race in second, which was enough to secure silver, while Spain’s Jordi Xammar and Nico Rodriguez won bronze, the country’s first Olympic medal in the class since 1992.