Three cheers for India, two for Australia, and an encore for the game. It is still possible to play a hotly contested game of cricket and win with grace and lose with dignity, after all. Circumstances made this both a Test match and a test event, for a better polity. On both levels, it charmed to the end.

When the last catch was held, Indian captain Virat Kohli whirled like a dervish for a moment, then went immediately to the disconsolate Josh Hazlewood, to the umpires and to Nathan Lyon as he rose from his haunches at the other end. Hugs and handshakes followed all 'round. 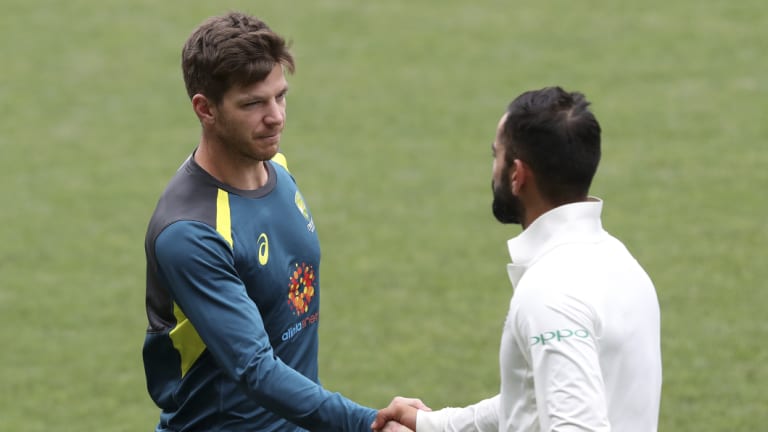 Tim Paine and Virat Kohli shake hands after the match.Credit:AP

Good manners did not win India this match, nor did an excess of them lose it for Australia. A pitch that held up and the application of Shaun Marsh, Tim Paine, Starc, the immovable Pat Cummins and finally Lyon and Josh Hazlewood almost stole it for Australia. A potent three-pronged pace attack and the unflagging toils of off-spinner Ravi Ashwin finally saved the win for India, with special mention to wicketkeeper Rishbah Pant for his 11 catches (and condolences about a record 12th that squirmed away at a crucial stage).

India led from pillar to post, but somehow, this became a narrow thrashing. Australia still needed 64 at the fall of the ninth wicket. But the pitch proved less rough and tough than it looked, Lyon and Hazlewood cemented themselves in, the score kept mounting and the crowd and the nation were drawn in to another Adelaide cliffhanger.

Dots were clapped individually, singles hailed like Caesar, boundaries rejoiced in as if they were national holidays, but between times silence reigned. The voluble Pant lost his voice for the first time in five days, and even the press box fell as quiet as if stewards were holding up placards from the golf. Suddenly, every run had the weight of two, every near-miss a nick out of hearts on both sides. An Ishant no-ball was a twisting of the knife to India, Hazlewood's deliberate tip over slips another, yet still they bit their tongue while Australia swallowed its stomach.

And then, in an instant, it was all over. In the tetchy humour of previous series, there might have been questions asked about the last catch – on television, one was, briefly – but Australia did not go there and India would not be led to it. It was as if there was a pact to be better than that.

And perhaps they are. When these teams last met here, days after the death of Phillip Hughes, a tacit ceasefire was called. It didn't last until the end of the second day. But the personnel were different then, and the balance of power, and so was Kohli. Diplomatic relations between the teams may yet fray in this series, but at least we can be fairly sure now that won't be a policy of calculated provocation and affected victimisation on both sides, as per recent clashes.

Manpower and inexperience lost Australia this Test, and in the end perhaps the 36 sundries in India's second innings, not a lack of faux aggression. Australia can console themselves that they did pass one of the tests they had set for themselves this series, of poise and propriety. In the other, they were outplayed throughout, but almost won anyway, and so will convince themselves that all is not lost yet.

12pm Man Utd transfer news LIVE: Jadon Sancho BACK in the UK as he closes in in move, Paul Pogba LATEST, Henderson deal – The Sun