Sometimes, a genius can out-think himself.

That's the consensus of some of Bill Belichick's former players after the New England Patriots coach came up with the wrong strategy the team's 34-33 "Miracle in Miami" loss last weekend.

Here's what happened. The Patriots were leading 33-28 – seemingly this close to a rare recent win in Miami – when the Dolphins pulled off a wonderfully absurd play that seemed to unfold in slow motion, involved a couple of laterals and resulted in a 69-yard touchdown. Oddly enough, one of the guys on defence was the often-injured tight end Rob Gronkowski, who stumbled and couldn't regain his footing in time to tackle Kenyan Drake before he reached the end zone.

The problem, as Tedy Bruschi saw it, was that Gronkowski shouldn't have been in there. "Gronk was in because that is a 'last play' defence," Bruschi, a Patriot under Belichick for 13 seasons, tweeted in criticism that was more analytical than brutal.

"The last play can be a Hail Mary pass. In a situation where chances of a Hail Mary are low, the 'jumper' (Gronk) should be substituted for another safety/DB. For tackling purposes. That was not done."

"Coach Belichick outsmarted himself having Rob Gronkowski on the field for a 70-yard Hail Mary and keeping his best defensive player on the sidelines, Devin McCourty," NBC's Rodney Harrison said on Football Night in America.

Donte Stallworth, who played for Belichick and the Patriots in 2007, wondered in a tweet: "Why is Gronk in on defence with the ball on the minus 30 yard line on the last play of the game? That's not hindsight, either. This is not Hail Mary territory." 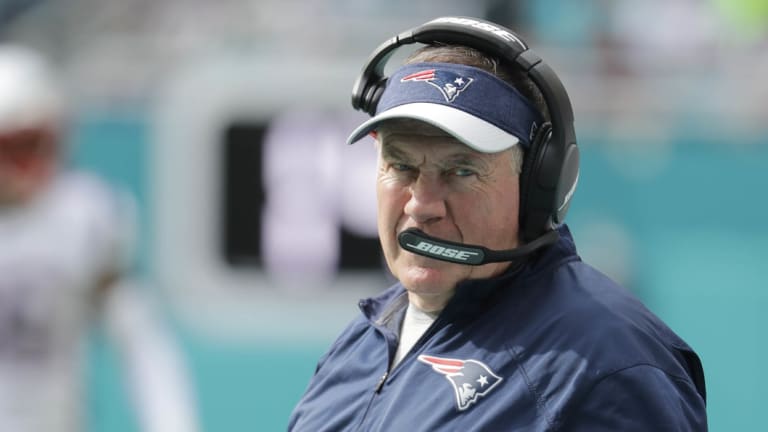 Danny Amendola, the Dolphins' wide receiver who played for Belichick and the Patriots from 2013-17, admitted that he had "never seen anything like that in my entire life. It was f—— crazy".

The issue, as far as Dolphins quarterback Ryan Tannehill was concerned, was that a Hail Mary was an unlikely option for him because he was sidelined six games this season with an injury to his throwing shoulder. It was, an unnamed Dolphins player told the Miami Herald, a "bad, bad, bad" coaching decision.

For Drake, it came down to a one-on-one. "It was me and Gronk and I couldn't let Gronk tackle me. Look, sorry Gronk, he's a great player, but I got somewhere to be."

Gronkowski admitted that he had "never really been a part of anything like that" and said he "did sucky". "I didn't think it was going to get to me and then I saw the guy trucking down the field and you saw what happened from there."

Belichick's explanation? Nothing terribly revelatory. "Obviously, it's a real disappointing ending for us today. There's a lot of things we could have done better," Belichick said. "It came down to one play, but there were a lot of things besides that. In the end, we've just got to do a better job than we did. Miami played hard like they always do, and they just made one more play than we did."

But … why have Gronkowski, whose 6-foot-6 height is a Hail Mary advantage overshadowed by his weight, speed and past injuries, in there? "Yeah, well, they could throw it deeper," Belichick said. "They could have run the Desperado-type play, which is kind of an in-between 20-yard pass, then it turned into a Desperado."

Instead, it was merely wild. "The play kind of got messed up," Tannehill said. "I saw Kenyan there, I said [to DeVante Parker] 'Pitch it! Pitch it!' He pitches it, Kenyan came back inside … Then I saw him and [Gronkowski] about 10 yards away. I said, 'Gronk's on the field? We got this!' So, yeah, it was pretty amazing. I was following behind and I actually just turned around and collapsed just with the emotion of the whole thing."