Australia's SailGP skipper Tom Slingsby is lobbying for the US$1 million ($1.4m) match race of the next series to be held in Sydney as he fights for the "best sailing harbour in the world" to stay on the calendar.

The lucrative concept, which pits the best sailors in the world against each other on identical hi-tech F45s, has announced San Francisco, New York, the United Kingdom and Denmark will host events in next year's rescheduled series. 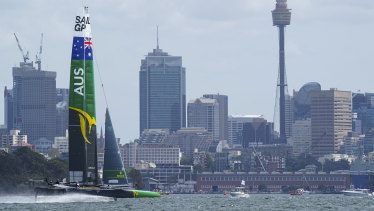 The other three venues for the seven-race series, to begin in April next year, will be announced at a later date.

This year's competition was abandoned due to the COVID-19 pandemic after the opening leg in Sydney, which also launched SailGP in 2019.

Australia is yet to be guaranteed an event when SailGP resumes in 2021 and Slingsby is campaigning for the city to host the final regatta, which culminates with the nerve-racking match race between the series' best two crews.

"The hope is Sydney will be on the calendar again and at the back end of the season so there's a bit more hype about it leading up to that $1 million race," Slingsby said. "We now have a New Zealand team and I'm hoping we don't lose the Sydney event to Auckland.

"We have the best sailing harbour in the world – and I can say that with my hand on my heart. The way it is showcased with the Harbour Bridge, the Opera House and how we use Shark Island as the spectator venue so we can get so close to the shore … it's like no harbour in the world.

"I think SailGP and the event we run here really showcases that to the world. It would be a real shame if we lost the event here."

Slingsby led Australia to victory in the inaugural SailGP series, toppling countryman Nathan Outteridge and his Japan crew in the match race in Marseille.

The addition of Olympic legend Ben Ainslie to the Great Britain crew added intrigue to this year's concept with the four-time Olympic gold medal winner leading guiding his craft to a comprehensive win in Sydney.

"They were the final piece of the puzzle for SailGP," Slingsby said. "Now we've got the very best sailors in the world racing.

"We don't need any extra motivation to beat a Kiwi team, the same with the British I guess. These top America's Cup teams who weren't believers were switched over pretty quick.

"There's a couple of young guys on that team where it seems everything they touch turns to gold with their Olympic sailing and America's Cup as well."