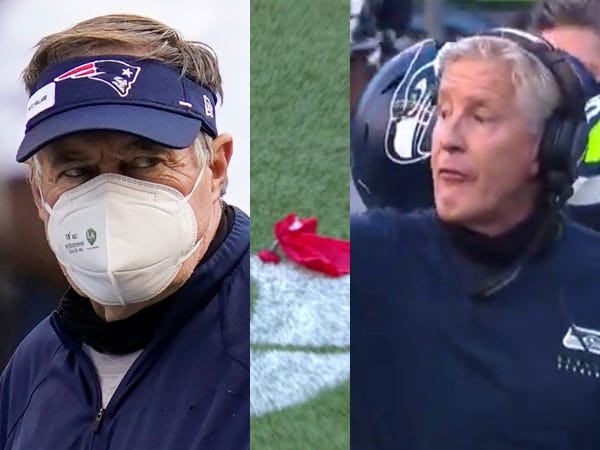 Bill Belichick got away with one again on Sunday night.

Facing off against the Seattle Seahawks in primetime, Belichick and the Patriots were able to pull a challenge flag they had thrown off the field before referees noticed, saving themselves the challenge for later in the game.

The moment came in the second quarter with the Patriots driving for a touchdown. On second down near the goal line, quarterback Cam Newton had thought his dive had crossed the plane for a touchdown, so much so that he began to celebrate.

Unfortunately for Cam, referees would mark him down just shy of the goal line, forcing the Patriots to play for a third down. At some point here, the red challenge flag fell to the ground on the Patriots sideline — the exact moment wasn't caught on camera.

But the referees didn't notice. Newton and the Patriots lined up for third down, and Newton took it into the end zone.

This time there wasn't any doubt.

The Patriots were able to get their challenge flag off of the ground before the referees got wise to the situation. Still, the Seahawks' head coach was clearly aware of what had happened, as he was laying into any official who would listen.

Carroll's anger is understandable. Had the referees gone to review the play, Newton's initial run might have turned into a touchdown, but the Patriots at least would have been down a challenge for the rest of the game. Instead, Cam scored easily on the next play from scrimmage, and Belichick got to keep both of his challenges for the game in his pocket.

Beating the Patriots is never easy.