Vinery Stud’s evergreen sire More Than Ready, the most shuttled stallion in the world, is in his last month of finishing his final Australian tenure with the 21-year-old racing and breeding superstar to spend his final days at their American base. 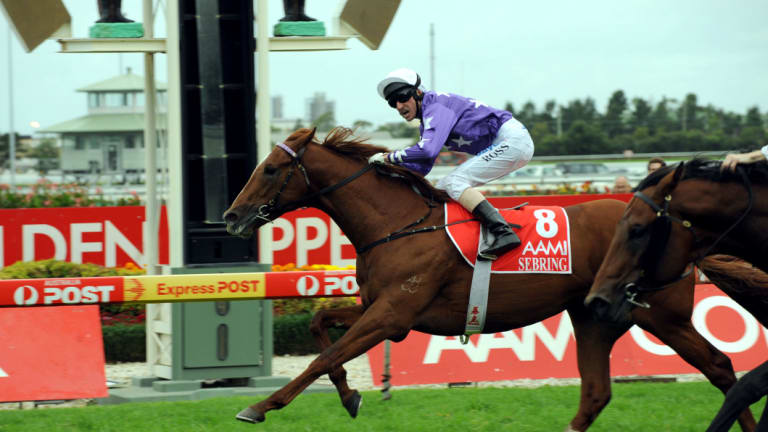 Leaving a legacy: Sebring, a son of More Than Ready, wins the 2008 Golden Slipper.
Credit:Adam Hollingworth

There is no sign of retirement for the son of Southern Halo who has produced many champions in both hemispheres and boasts 17 group 1 performers, the latest being Uni in the Matriarch Stakes at Del Mar last Sunday.

Uni’s win gave More Than Ready his fifth North American group 1 success in 2018 and his popularity in both hemispheres on and off the racetrack has been quite phenomenal.
He has sired more than 1750 individual winners and apart from being the most shuttled horse he has also sired the most winners worldwide; the only other stallion to produce more than 1600 winners is the mighty Danehill with 1622.
Among More Than Ready’s best performers are the southern hemisphere-raced More Joyous, Sebring, Prized Icon, Samaready and Phelan Ready with his American stars including Verrazano, Catholic Boy, Roy H and his son Pluck, who is also a Vinery-owned stallion.
He has sired three Breeders’ Cup winners, two Golden Slipper winners, a Doncaster, Derbies and Blue Diamond. More Than Ready stood his last Australian season at a covering fee of $66,000 including GST and will command a fee of $US80,000 ($108,650) at Winstar Farm in Kentucky in 2019.
More Than Ready has a plentiful supply of yearlings catalogued for the major Australian sales in 2019. He has 29 lots at the Magic Millions, 15 at the Inglis Classic, 13 at Inglis Easter and nine at the Melbourne Premier Sales, for a total of 66.

Snowdens youngsters impress
Team Snowden’s reputation for preparing two-year-olds has continued to soar and they have made a great start in the 2018-2019 racing season.
Peter and Paul Snowden have nurtured some of the most exciting young stallions now standing in the Hunter Valley, in Capitalist, Pride Of Dubai, Russian Revolution, Shooting To Win, Invader, Pariah and Outreach.
An example of their big number of two-year-olds occurred at Wyong on Monday when Team Snowden took four ‘‘babes’’ for official barrier trials and returned home knowing they had another imposing bunch of youngsters to represent them in coming weeks.
Tommy Berry finished third in the first two-year-old trial (Heat 6) on Destinato (Dissident), then Corey Brown had armchair rides on the next trio with stunning winning performances.
Howra (I Am Invincible) won the 845-metre heat, running 51.24 (last 600m in 34.96) under a stranglehold, and in the following heat L’Cosmo, a Lonhro filly from the top-notch mare Cosmic Endeavour, also had a jog-trot to win in 52.94 (last 600m in 35.45). Rounding off the three wins was Vitai Synergy, a fine-looking filly by Dissident from the good mare Longing, and she was terrific in the time of 51.42 (last 600m in 34.25).
All three winners appear to have better-than-average futures.
Several Sydney-based trainers have enjoyed a great two-year-old success rate with James Cummings’ Godolphin youngsters showing great potential while the Waterhouse-Bott duo also have met with tremendous results in Sydney and Melbourne.
Warwick Farm-based Gary Portelli is another with some exciting prospects and the coming two-year-old racing leading into the Magic Millions and Golden Slipper carnival will bring forth future stars on and off the track.
FOOTNOTE: Another impressive trial winner at Wyong was the Brad Widdup-prepared filly Witherspoon, a daughter of Exceed And Excel who was unextended to win her 845m heat in the fastest time of the morning, clocking 50.06, the final 600m in 33.32.

Northern swoop
Australasian breeders were prominent at this week’s December Mare Sale at the Tattersall’s complex in Newmarket, underlining the popularity of bringing northern hemisphere broodmares Down Under to be partnered with our speed stallions.
The sale has a huge following with the world’s biggest buyers seeking champion fillies and mares with mouth-watering pedigrees to add to their broodmare harems.
Australian breeders have had some excellent results with northern mares and were out in force.
New Zealander Dean Hawthorne, acting for Victoria-based owner-breeder Jonathan Munz, was dynamic in seeking to purchase the ultimate sales-topper – Pearling – but pulled out at 2.4 million guineas.
Pearling was one of seven fillies and mares which fetched seven figures, with a further 21 mares selling above 500,000 guineas.
Turnover for day two selling was an extraordinary 42,534,600 guineas, an average of 218,126.
Hawthorne secured two broodmares to eventually bring back to Australasia; Puppetshow, a daughter of the super sire Galileo, fetched 380,000 guineas, while Hawthorne paid 130,000 guineas for Wonderland, who is in foal to Kodiac.
Widden Stud’s Antony Thompson went to Tattersall’s specifically to buy several mares to be mated with Zoustar when he travels to Tweenhills Stud in Britain to serve the northern hemisphere breeding season. On day two Thompson had secured three mares for 290,000 guineas.
Cambridge Stud was on hand for the second successive year after they bought six lots last year; They outlaid 417,000 guineas on five mares on days one and two, and topped it off with a further mare for 55,000 guineas on Wednesday.
The Victorian breeding farm of Sun Bloodstock outlaid 560,000 guineas for two mares: Christmas Joy, who was in foal to War Front, for 350,000 guineas, and 200,000 guineas for Wisdom Mind, whose pedigree page reads strongly.
Damon Gabbedy was with the Victorian Woodside Farm Stud representatives; Swettenham Stud was also among the buyers, as were Mark Pilkington, John Foote, Paul Moroney and Rosemount Stud.

Football lookalikes: From 'Bruno' as Fernando Torres and Rafa Benitez the Toy Story character, check out all the doppelgangers here