‘They deserve to get relegated for this alone’: Bournemouth fans ridiculed for wearing club-branded face masks amid coronavirus fears

Bournemouth fans were widely mocked after wearing protective facemasks in the crowd during the game against Aston Villa amid fears over coronavirus.

Eddie Howe’s were looking to lift themselves away from trouble at the Vitality Stadium on Saturday afternoon but the threat of relegation wasn’t the only danger for some.

It was widely suggested on social media that the two men were associated with the club, but at half time a Bournemouth official told reporters that they were season ticket holders, and not connected with the club. 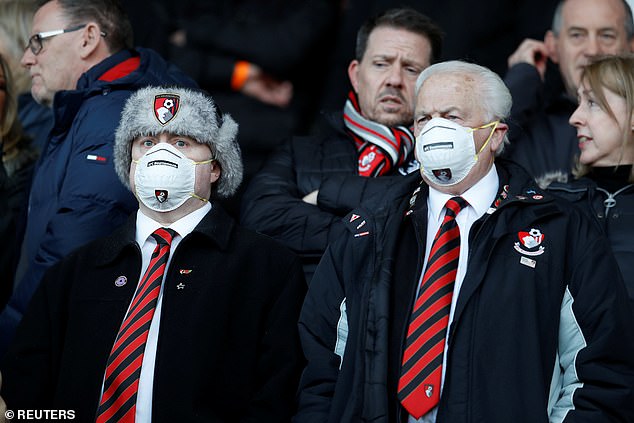 It comes after the virus, the World Health Organisation has declared as a ‘global emergency’, arrives in the United Kingdom having broken out from China.

Since the outbreak in the Wuhan region, there have been around 10,000 confirmed cases and 100,000 cases in which patients have shown symptoms and remain under observation. The death toll has also passed 250 people.

On Friday, two people from England were confirmed as the first people in Britain to contract the virus. The pair, who are from the same family, remain under observation. 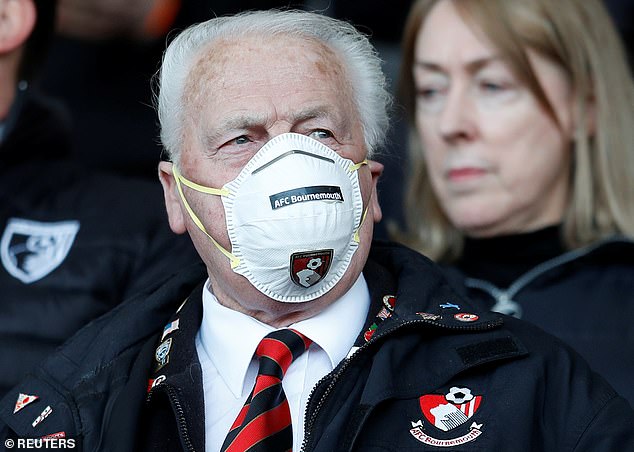 Following Friday’s diagnosis, authorities in the UK have launched a nation-wide hunt for anyone who came into contact with Britain’s first two patients.

But with the virus posing almost no danger at all on the south coast, plenty taunted those wearing the masks on social media.

Fans took to Twitter to share their thoughts on the Bournemouth chiefs, with some joking that the club should be relegated.

@CraigMurphy75 said: ‘They deserve to be relegated for this alone’m while @Gareth_Utd said: ‘What on earth are they doing’.

Meanwhile comments saying ’embarrassing’ and ‘state of it’ were made on the social media platform.

The Cherries are looking to make it back-to-back wins in the Premier League, having defeated Brighton in the south coast derby last time out.

Man, 21, arrested for murder of footballer Jordan Sinnott after star suffered fractured skull in mass brawl on night out – The Sun