Last weekend a peak audience of 2,748,434 across internet streaming platforms watched two teams compete for a $US1 million ($1.4 million) prize at a major tournament in Stockholm.

They were playing a video game.

Over two weeks, the world’s best 24 Counter-Strike teams, including the Australian-based Renegades, who qualified as Oceania’s best, were whittled down to two in lengthy matches of the first-person shooter. 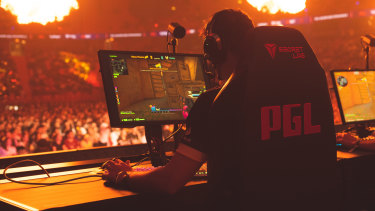 The world’s biggest esport, League of Legends – a strategy game that involves intense and precise input from players – held a tournament that reached a peak of 5.41 million viewers this year. A major tournament, also last weekend, reached about 4 million – more than the 2021 NRL grand final (Between Counter-Strike and League of Legends last weekend, there was a combined peak audience of close to 7 million).

The professional scenes around these titles, and many more – where organisations recruit, assemble and coach teams – represent a tiny fraction of active player bases that invest chunks of their lives into improving their game, in much the same way an amateur golfer might spend hours at the driving range.

Golf, which offers huge sums of money to the world’s best, is broadcast all over the world but, like esports, isn’t something that wins everyone over. As with all sports, it needs context and understanding of what it is like to play; how difficult it is to achieve certain feats and consistently perform them, let alone at the highest level. 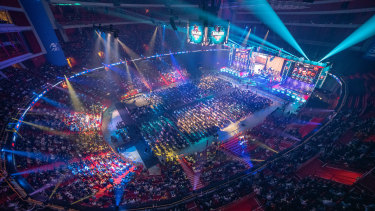 Production values have skyrocketed over the last decade as the popularity of eSports continues to grow.Credit:PGL

As in esports, most of the world’s golfers don’t make it to the PGA Tour. Of the 24 million people who play Counter-Strike: Global Offensive every month, only 120 qualified to compete in the PGL Major Stockholm.

The skill gap between the hobby player and top professionals is just as large as in traditional sports. Professionals are performing, in competition, at a level that most players cannot comprehend. A hobbyist who plays four times a week is unlikely to understand the deeper strategy at play between teammates, even with professional commentary.

The question is not whether video games are a sport, because Counter-Strike: Global Offensive is played as a sport.

When considering the competitive credibility of esports, it is important to recognise that an outsider cannot appreciate the depth of these contests without investing time and attention they are unlikely to want to give. You don’t have to be a golf fan to recognise that Tiger Woods is pretty good at what he does because the eyeballs – and, crucially, the money – surrounding these sports are evidence enough that something big is happening.

Note: outlines of players are not visible during gameplay, they are broadcast for spectators’ benefit.

The core of Counter-Strike has been in place since 2000: competitive tactics, styles of play and player skills have developed significantly over that time. With this much money on the line, professionals spend hours reviewing footage, devising new strategies and counter-strategies to train as a team and push the contest to new heights and popularity.

It’s also important to note that most players who log in each day are playing in casual games where you can drop in and out at any time – something like a pick-up basketball game at the park. After about 150 hours of play you might feel comfortable moving into “ranked” games, where the expectation is the game is taken relatively seriously – something more akin to an organised competition, with matching jerseys and two referees.

Beginners log in, they point and click, they get frustrated, they get lucky. They pick up a few kills (eliminating opposition players) and think they are getting the hang of it – think of that one friend who believes he is Steph Curry from the three-point line because he made a few. As the stakes rise it is consistency, communication and a feel for the game that separates the best of the best.

No one expects a video game to depose the NBA any time soon, but we’ve seen the concept at the grassroots level. Friends that once might have met at the park to kick the footy instead fire up their computers and team up online. It hurts to lose and a win can be exhilarating.

When it comes to the professionals, sport as we know it has proved one thing in recent decades: where there’s money, there’s a contest.

Tyson Fury, Deontay Wilder and the scarcely believable road that got us here

Yankees hold off Mariners as Chad Green picks up save