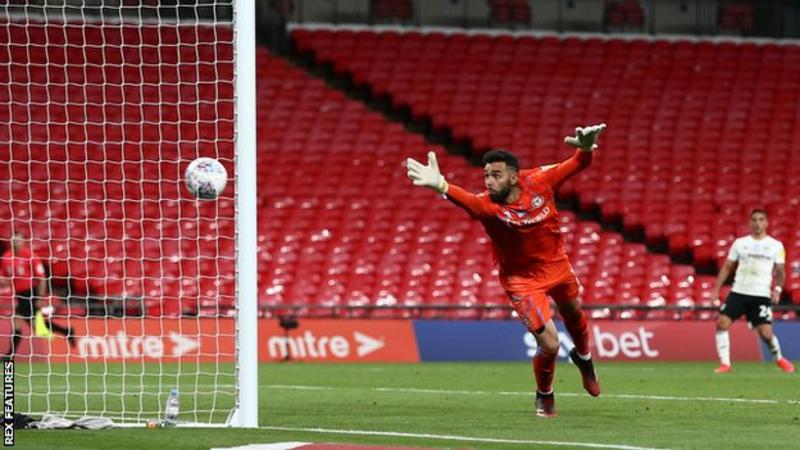 Fulham beat Brentford in the Championship play-off final to secure an immediate return to the Premier League thanks to two extra-time goals from Joe Bryan.

The left-back caught Bees goalkeeper David Raya off guard from 40 yards in the 105th minute of the game at Wembley, with the Spaniard expecting a cross and then unable to scamper back and save Bryan’s skidding low effort.

With the Bees pouring forward in search of an equaliser, Bryan burst forward and combined with Aleksandar Mitrovic before stabbing past Raya to make the game safe with three minutes remaining.

Henrik Dalsgaard pulled a goal back with a header from eight yards out in the fourth minute of added time, but it was too late for the Bees to spark a comeback.

The goals from Bryan were two rare moments of quality and quick-thinking in an otherwise cagey encounter between the two west London rivals, which finished goalless after 90 minutes.

Scott Parker celebrated wildly at full-time after leading Fulham to promotion in his first full season as manager.

The 39-year-old was unable to save them from top-flight relegation after replacing Claudio Ranieri in February 2019, but they can now prepare for a 15th campaign in the Premier League.

Parker was unable to call on top scorer Mitrovic, returning from injury, from the start – but the Serbia international showed composure to tee-up Bryan for the crucial second goal with a slick one-two inside the box.

Ivan Cavaleiro almost made it 3-0 for Fulham in the closing stages when he was denied by Raya, and Dalsgaard’s header came far too late to set up a Bees comeback.

Bryan had only scored one goal this season for the Whites heading into the game, but proved to be the hero as his strikes secured a promotion which could be worth £135m to Fulham over the next three years.

Goal! Brentford 1, Fulham 2. Henrik Dalsgaard (Brentford) header from the centre of the box to the bottom left corner. Assisted by Christian Nørgaard with a headed pass.

Aleksandar Mitrovic (Fulham) wins a free kick in the defensive half.

Attempt saved. Ivan Cavaleiro (Fulham) left footed shot from the centre of the box is saved in the bottom left corner. Assisted by Anthony Knockaert.

Ivan Cavaleiro (Fulham) is shown the yellow card for a bad foul.

Attempt missed. Saïd Benrahma (Brentford) right footed shot from outside the box is too high.

Attempt missed. Henrik Dalsgaard (Brentford) header from the right side of the six yard box is high and wide to the right. Assisted by Sergi Canós with a cross.

Attempt saved. Ethan Pinnock (Brentford) left footed shot from outside the box is saved in the top centre of the goal.

Sergi Canós (Brentford) wins a free kick in the attacking half.

Paige Spiranac jokes on TikTok about why ‘no one’ approaches her