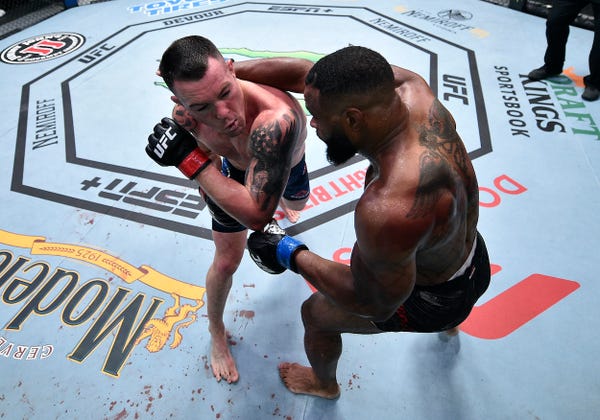 Covington starred in the UFC Vegas 11 main event, a behind-closed-doors combat sports show at the UFC Apex in Las Vegas, and won via fifth-round stoppage against Tyron Woodley.

The fight itself showed what was great about Covington — a tremendous engine, seemingly neverending striking during stand-up, and authoritative grappling while on the mat.

After the victory, the American wrestler spent his post-fight interviews touting a slew of right-wing rhetoric.

He said the November 3 US presidential election would "be a landslide," called incumbent President Donald Trump's opponent Joe Biden "sleepy Joe," and said Woodley "stands for everything I hate."

"[Woodley] stands for evil," Covington said. "He stands for Black Lives Matter. I stand for America."

In a separate interview, Covington, 32, rebuked James, an NBA icon-turned-activist who often makes headlines for philanthropy, his promotion of educational charities, and his leadership during the boycott of the 2020 NBA playoffs as a protest to the police shooting of Jacob Blake, a 29-year-old Black man.

Covington hailed "all the first responders [and] all the military out there," before criticizing James.

It's unlikely Covington will be reprimanded by the UFC because the company's president Dana White said the UFC is renowned for free speech and letting fighters say whatever they want.

"Even if it's me. If it's about me," White said. "Who's more about free speech than we are? We literally let our people do or say whatever it is they do. It's normal."

Covington is renowned for his "Keep America Great" and pro-Trump merchandise, while Woodley this week wore a shirt that read "Legalize Being Black" and answered every reporter's question during a media day by saying: "Black Lives Matter."

White continued: "Everything that happened this week, I f—— saw it coming a hundred miles away.

"I could write the entire script for you, what would've happened at that press conference," White said. "You guys know it too. Plus, you heard everything already. You heard all the talk. These guys wanted to fight, they hate each other, the whole deal."