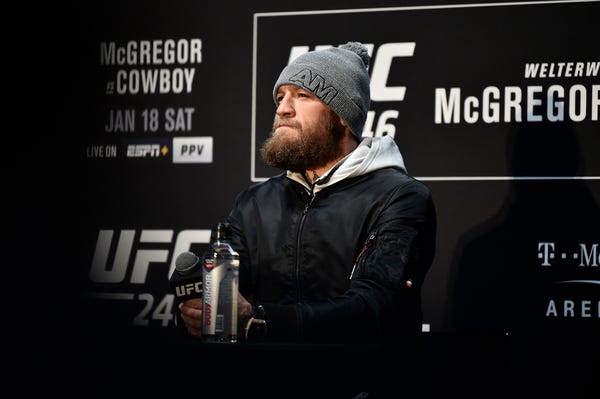 Conor McGregor reacted angrily to an allegation of "indecent exposure" last week in France, saying Tuesday that "the truth will always set me free."

McGregor was taken into police custody in Corsica on Saturday after a September 10 complaint accused the former fighter of "attempted sexual assault and sexual exhibition," according to a Bastia prosecutor as reported by AFP Sport.

A legal spokesperson for the Irishman said the 32-year-old "vigorously denies any accusations of misconduct."

And his manager, the Paradigm SM founder Audie Attar, later said that he is personally "irate."

Attar said: "[I am] putting out a warning loud and clear: Conor McGregor is not and will not be a target for those seeking to score a headline or a payday."

Using a similar tone in a statement on his private Facebook account, which TMZ confirmed to be real, McGregor said he will fight the "bulls—" claims.

"Try set me up all yous f—— want over and over and over the truth will always set me free! Be it baby father claims, rape, indecent exposure, bulls—, WhatsApp group s—. You f—— name it. Never will I fold!

"The truth is the truth and it gives me wings. I know my character!

"Never will a dime be paid to anyone coming at me with vicious lies! Not now, not f—— ever! I will fight! And I am only beginning my fight!

"All these past incidents you will see! They will not be forgotten! I will not allow these people to just accuse me and then disappear into the dark to attempt to ruin someone else life! No f—— way!"

McGregor also said: "I will never kill myself no matter how many wish for it."

How Arsenal will line-up next season with Willian up front, Disasi and Saliba in defence… but no Aubameyang – The Sun

Sports fans weigh whether to attend games amid coronavirus outbreak

What’s next for Titans, Vikings after COVID-19 outbreak