Cummins has twice in four deliveries in Test cricket dethroned the Indian king.

In the first Test in Adelaide on Thursday, Cummins dismissed Kohli with his third ball of the innings, and third to the Indian captain. 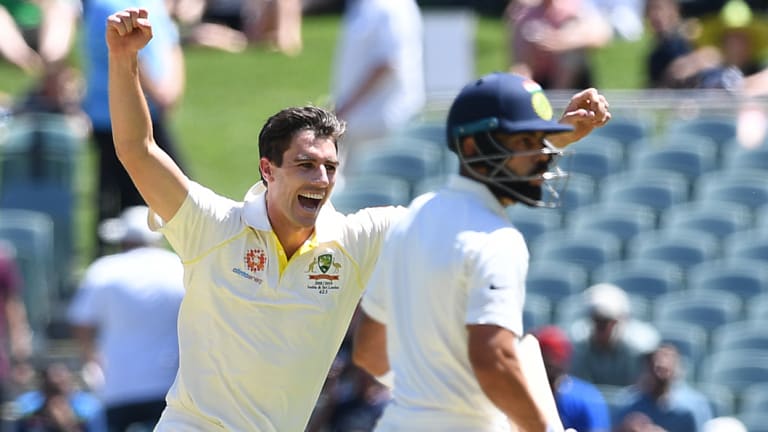 Pat Cummins celebratesVirat Kohli’s wicket as the batsman stands at the crease after Usman Khawaja’s catch.Credit:AAP

In Ranchi in March last year, the Australian quick claimed Kohli's scalp with the only ball he bowled at the Indian hero.

Both times, Kohli has fallen cheaply – just three runs in Adelaide, only six in Ranchi.

Kohli on Thursday fell to a barely believable catch by Usman Khawaja at gully.

The Indian skipper played a loose shot, driving away from his body to a fullish Cummins delivery.

The ball caught the edge of Kohli's bat and flew to the left of Khawaja who, diving at full-stretch, completed a stunning one-handed catch.

As Australian players mobbed Khawaja, a man not renowned for his fielding, Kohli stood at the batting crease in disbelief at the brilliant catch.

After a prolonged pause, Kohli turned and headed to the dressing room after a rare failure in Adelaide.

Khawaja, who before the match detailed a fitness regime in which he had lost 10kg in weight, took the field on Thursday just two days after his brother was arrested following a counter-terrorism investigation.

Arsalan Tariq Khawaja was arrested in Sydney on Tuesday and charged with attempting to pervert justice and forgery.

He was granted bail amid accusations he framed a colleague with a fake terror hit-list targeting senior politicians.

Usman Khawaja didn't train with his Australian teammates on Wednesday, sticking with his customary Test-eve routine of skipping the optional session.