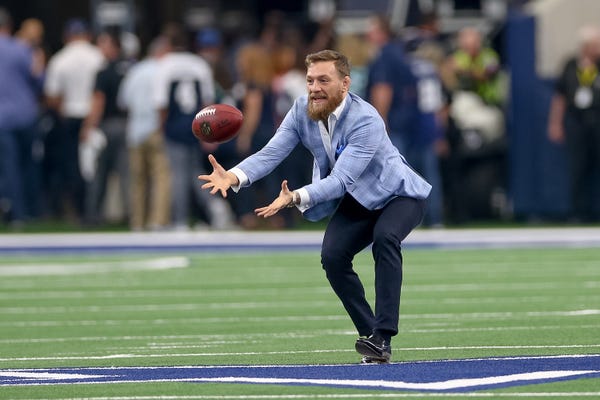 McGregor accepted the Poirier fight deal in principle after the UFC issued a "yes or no" ultimatum regarding the event's scheduling in January.

He tweeted "I accept, January 23rd is on! My goal is to see this fight take place in Cowboy stadium. Proper style! Jones is a friend and the stadium can hold our crowd. I will be ready for Texas and Texas will be ready for my fans."

Responding on 105.3 The Fan radio, Jones said: "I'm a real admirer of his. He's one of the neatest individuals I think I've met, period.

"To be as physical as he is — he has an unbelievable personality and charisma. He's special. It would be quite a day for AT&T Stadium to have him."

McGregor met Jones during a visit to the AT&T Stadium in 2018. He threw a football, had photos taken, and even approached Jones with the idea of holding a UFC event at the iconic NFL venue.

According to The MacLife, a website McGregor owns, he said at the time: "I was saying, 'You know what would look good in this stadium? Bang in the center of it? A UFC Octagon.'

Speaking to the ESPN broadcast crew from Fight Island, a quarantined area on Yas Island in Abu Dhabi, White confirmed that he expects a McGregor and Poirier fight to take place on January 23.

However, he said he would not be taking it to a mega stadium.

"He posted publicly that he accepts the date. We made that date for him, that's his date, and I expect them both to fight."

On McGregor's desire to take the bout to the AT&T Stadium, White said: "We've had a relationship with Jones for a long time and we've been taking for years about going to Texas.

"If things change after this election, and we can go back to normal life and fill stadiums, then I will.

"If not, I'll do it either here on Fight Island or we'll do it in Las Vegas [at the UFC-owned facility Apex]."

COVID-19 Doesn't Discriminate. Take It From This Millennial Recovering From The Virus