Darren Stevens hit a mesmerising 190, off just 149 balls and containing 15 sixes, to single-handedly propel Kent to a first innings score of 307 after having been 128-8 at one stage on day two of their LV= Insurance County Championship match against Glamorgan.

But then the 45-year-old, evergreen Stevens countered in spectacular fashion, sharing in a partnership of 166 for the ninth wicket with Miguel Cummins, to which the latter contributed just a single.

Stevens took 92 balls to go through to a blistering century, while the ninth six of his innings brought up his hundred partnership with Cummins.

He was subsequently dropped on the boundary by Marnus Labuschagne, and again by Billy Root, while a vicious square cut knocked umpire Richard Illingworth off his feet. Illingworth was unharmed and the two bumped fists before play resumed.

Stevens finally fell to the part-time leg spin of Labuschagne, caught by Kiran Carlson at long on with the score on 294, while Cummins too was bowled by Labuschagne for seven to end the innings.

In reply, Matt Quinn picked up David Lloyd for four, before the relentless Stevens stepped up with the ball and gained revenge against a disgruntled Labuschagne by trapping him lbw for 11.

Joe Cooke (10no) and Billy Root (21no) steered Glamorgan to stumps without further loss, Glamorgan closing an extraordinary day on 55-2, trailing by 252.

Elsewhere, a beautiful delivery from Tom Helm to dismiss Hashim Amla was the highlight of a rain-ruined second day of Surrey‘s Group 2 game against Middlesex at the Kia Oval.

Helm (2-43), in only his County Championship outing of the season for the visitors, clean-bowled the former South Africa Test batsman for 24 with one which came into the right-hander on the angle before jagging away and clipping the top of off-stump.

However, just 18 overs of play were possible in the morning session before the heavens opened – Surrey 185-8, still in their first innings, having added 39 runs for the loss of two wickets to their overnight score.

Blake Cullen (2-29) claimed the other wicket to fall, inducing the edge from Rikki Clarke (19) through to wicketkeeper John Simpson a mere three deliveries after Amla’s dismissal.

As the bad weather set in, play was ultimately abandoned shortly after 3.30pm.

In the sole game that started on Wednesday, eight wickets fell for just 38 runs inside the 13 manic overs of play that were possible on day three of Hampshire‘s Group 2 game against Leicestershire at The Ageas Bowl. 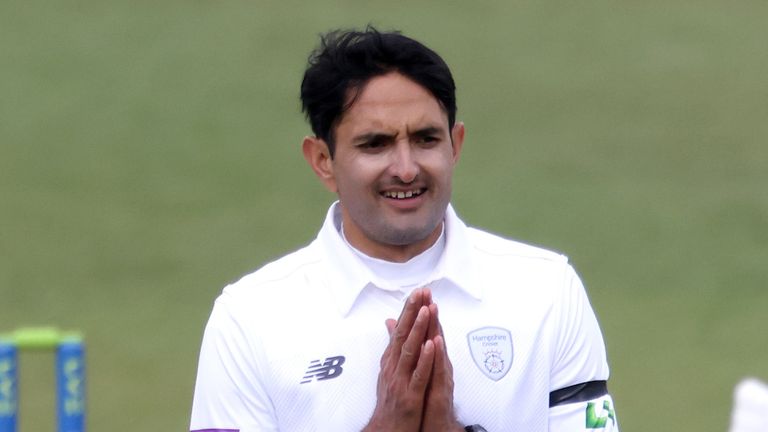 The visitors crumbled to 28-5 in 9.5 overs their first innings in reply to Hampshire’s 233 all out – the home side adding only 10 runs to their overnight total as they lost their final three wickets inside three overs.

Chris Wright (4-71) and Ed Barnes (4-61) shared the wickets to finish with four apiece, but then Hampshire’s new-ball pairing of Kyle Abbott and former Foxes seamer Mohammad Abbas quickly outdid them.

Abbott (3-22) and Abbas (2-5) tormented the Leicestershire top-order in conditions tailor-made for two high-class Test quicks before torrential rain returned and forced the players off.

Leicestershire need a further 55 runs to avoid the prospect of following on, Hampshire’s best hope of forcing victory on the fourth and final day.

On day two in Chelmsford, Peter Siddle returned his best bowling figures for Essex but rain prevented the home side from pressing home their advantage after bowling Warwickshire out for 166 in their first innings of their Group 1 encounter.

Former Australian international Siddle returned fine figures of 6-38 – his best since 2015 – as he claimed two of the final three Warwickshire wickets to fall.

The Bears added just seven to their overnight total, though Tim Bresnan (50) did at least bring up his 43rd first-class fifty before he was the last man out, to Sam Cook (3-48)

In reply, Liam Norwell had Nick Browne caught behind for four to leave Essex 16-1 after just 7.3 overs before rain brought an end to proceedings at 12:15pm.

No play was possible at all on day two of four County Championship games, with washouts in Bristol, Derby, Northampton and Nottingham.

Watch day three of Surrey vs Middlesex in the County Championship, live from 10.55am, Saturday, on Sky Sports Cricket.