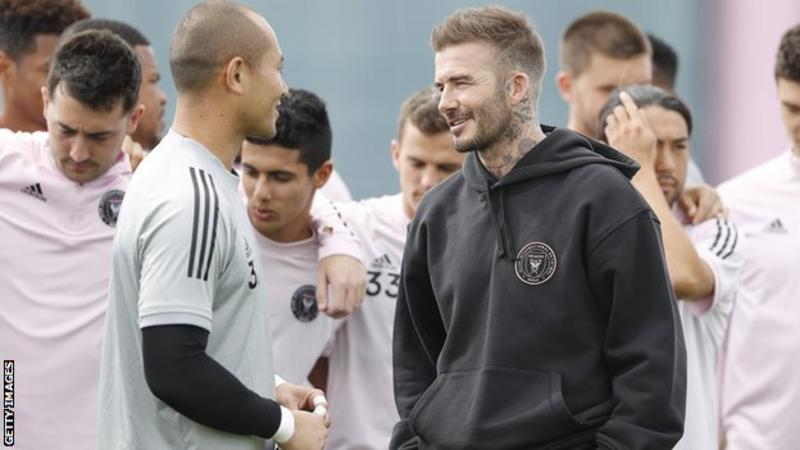 David Beckham has told BBC Sport his “perseverance, stubbornness and bloody-mindedness” are why he always believed his club Inter Miami would play in Major League Soccer.

The dream, which began in 2014, will come to fruition on Sunday when his Miami franchise travel to Los Angeles FC for their first MLS match.

The former England captain expressed his delight in reaching this point and highlighted the importance of having the full backing of his family.

“Victoria [his wife] has seen me go to Miami, be happy and then come back a little bit deflated,” said the 44-year-old, who co-owns the franchise with construction magnates Jorge and Jose Mas, Bolivian billionaire Marcelo Claure and Korean-Japanese entrepreneur Masayoshi Son.

Media playback is not supported on this device

“It’s been a rollercoaster ride during the past few years. I’ve had a huge amount of support from the family, as you can imagine.

“They’re just so emotional about the whole thing. We’re the same as owners – to see what we’ve gone through and to see what has happened… good, bad. Victoria has witnessed that with me – she’s so proud and so excited for us.

“The fact this is now happening, the fact I look at our stadium… the white lines are down and the goals are up. That for me is an exciting moment.”

‘I’m not nervous at all’

The saga began prior to 2014, when Beckham exercised an option in the deal which brought him to LA Galaxy in 2007 to own a franchise.

Since then he has endured issues over stadium location and planning and has had to remain patient for the all-important green light from the MLS.

“My wife talks about my stubbornness and I tend to agree with her on this point,” the ex-Manchester United and Real Madrid midfielder added.

“Over the past seven years I could have walked away, do another city or something else. I knew deep down this was the right thing.

Have we got aspirations of bringing big-name players? Of course we do

It's mind over matter for her

Yankees betting they have the ‘right’ stuff on offense: Sherman