The wife of Dwayne Haskins has been charged with domestic battery after allegedly knocking out the backup Steelers quarterback’s tooth earlier this month while the couple was in Las Vegas renewing their wedding vows, according to multiple reports.

Kalabrya Gondrezick-Haskins faces a felony charge of battery and domestic violence resulting in bodily harm stemming from the alleged altercation at The Cosmopolitan, according to KTNV.

Kalabrya Gondrezick-Haskins faces a felony charge of battery and domestic violence resulting in bodily harm stemming from the alleged altercation at The Cosmopolitan.
(LVMPD)

Haskins, 24, was treated for facial injuries at a local hospital, and officers on the scene reportedly found the missing tooth in the hotel room.

“I want her out of my room,” Haskins told a security officer at The Cosmopolitan following the incident, according to KLAS. “She hit me and cut my lip open.”

Haskins-Gondrezick, a former Michigan State basketball player, told police that the couple married in March and were in the area to renew their vows and celebrate with friends.

Although Haskins-Gondrezick is due in court Aug. 3, the pair seems to have made up.

On Sunday, Haskins shared a photo on Instagram of the couple flashing her apparent wedding ring with the caption, “Couldn’t make you wait forever, for forever. This is forever.” 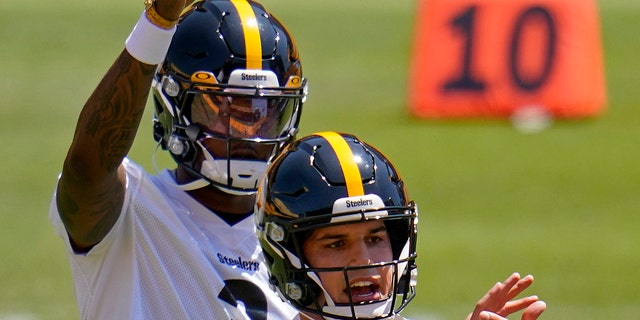 The incident marks the latest off-field drama for Haskins. A 2019 first-round draft pick by Washington, Haskins was released by organization after two tulmultous seasons, in which he lost the starting job and was fined $40,000 after violating COVID-19 protocols by partying without a mask.

Haskins signed a one-year, $850,000 deal with the Steelers in January.