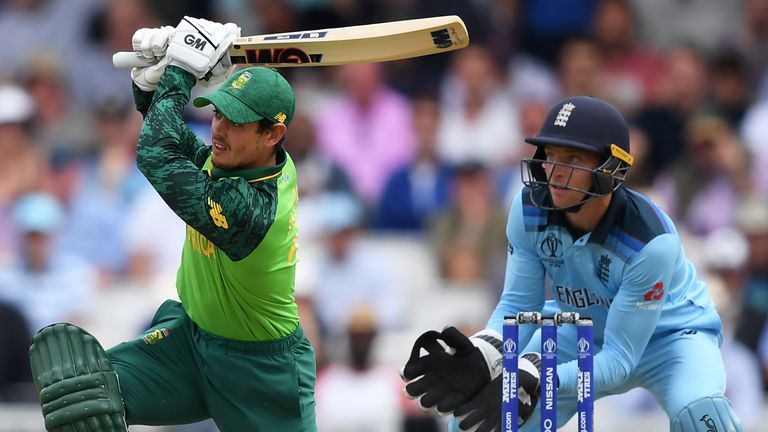 England vice-captain Jos Buttler says South Africa wicketkeeper-batsman Quinton de Kock is one of his “favourite players in the world” ahead the white-ball series between the sides.

Eoin Morgan’s team are flying to South Africa on Monday and will play three T20 internationals and one-day internationals between November 27 and December 9 and Buttler admitted he was a fan of the hosts’ star batsman.

Both Buttler and De Kock featured in the recent Indian Premier League in the UAE and having been a part of victorious the Mumbai Indians team, the South African will now lead the Proteas against England.

“I’m a huge fan of his, I think he’s a fantastic player,” Buttler told reporters. “I think he’s got an excellent cricket brain, I like the way he looks at the game and the way he takes it on.

“He’s probably one of my favourite players in the world at the moment. Having played against him, he’s incredibly difficult to keep quiet with the bat, I enjoy his wicketkeeping style as well, he’s a fantastic wicketkeeper.

“He’s a brilliant player and he’ll be a real danger man for South Africa on this trip.”

There were doubts over whether the tour would actually go ahead as late as Friday due to the ongoing issues at boardroom level at Cricket South Africa but with England set to depart as planned, Buttler expects it to be business as usual.

“Once it’s planned you’re just excited and looking forward to the tour,” he said.

“Reading in the paper the tour was in doubt, you are wondering if it was going ahead, but [ECB director of cricket] Ashley Giles got in touch with all the players and said he was confident it would go ahead.

“I think everyone is grateful – especially so close to your departure date you are starting to gear up to go. We’re delighted it can go ahead.”

During the coronavirus pandemic, sport has been one of the things that has offered people some form of escapism, and that responsibility is not lost on Buttler.

“All the sport that has been live on TV has been a big plus for everyone, being in a lockdown,” he added. “You’re always trying to put on a good show for the people watching at home. “You’re aware that there are going to be millions more watching at home and on screens. It’s been a tough year for the majority, we’re very lucky that we’re able to carry on and play professional cricket. It’s our duty to play well and put on a show for the people watching at home.”

With two T20 World Cups in the next two years, the first of which is less than a year away, England will also be using the series to firm up their plans, with the make-up of the XI still undecided.

“To go and win the series is the ultimate aim,” Buttler said. “We’re obviously building towards a World Cup but one thing that we did very well in 50-over cricket was win and learn at the same time building into a tournament so, of course, winning gives you confidence.

“One thing we had in the 50-over World Cup was that the team nearly picked itself by the end of that cycle and that is a great place to be as a side, it gives a lot of confidence to the guys playing a lot of games with each other so then heading into a tournament, in high-pressure situations, you’re very familiar with your own role and what you expect of your team-mates.” While T20 is England’s priority for the time being with Ben Stokes, Jofra Archer and Sam Curran rested for the ODIs, Buttler will remain for the 50-over series and is looking forward to playing in the format again even though it means spending more time in a bio-secure bubble.

“One of the great things with the ECB now is that it is a very open conversation about how guys are feeling and player wellbeing,” he said. “Having my family with me the whole time during the IPL has obviously been a huge plus for me and my mental wellbeing.

“It’s still a relatively short tour, even with three extra ODIs, I was keen to go out and play. I’ve also really missed playing ODI cricket. Since the World Cup, I’ve only played three games I think so I’m really looking forward to getting back in amongst that team.”

Watch every game of England’s white-ball tour to South Africa live on Sky Sports Cricket, starting with the first T20 international from 3.30pm on Friday, November 27.

Jadeveon Clowney spurned ‘richest offer on the table’ from Browns

Chelsea U23 vs Liverpool U23: Live stream, TV channel, kick-off time and team news for Premier League 2 clash – The Sun