Evander Holyfield will fight Kevin McBride after negotiations for a bout with Mike Tyson fell through, according to Kris Lawrence, an adviser to Holyfield.

The eight-round exhibition match will take place June 5 in Miami on the undercard of a fight between Teofimo Lopez, the undisputed lightweight champion, and George Kambosos Jr.

Holyfield, 58, will be fighting for the first time in more than 10 years and against a boxer most famous for scoring a TKO against Tyson in what was the last fight of Tyson’s pro career.

But Lawrence also said he thinks a fight between Holyfield, the former undisputed heavyweight champion, and Tyson still will take place.

“It’s just too big not to happen," Lawrence told USA TODAY Sports. “That would be the biggest show on earth, you know?" 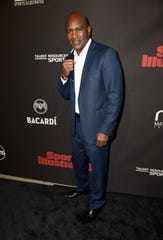 “I have no clue about those guys," Spicer told USA TODAY Sports. “Holyfield went from negotiating being a 50-50 participant in a major PPV event with Mike Tyson to being on the undercard.

“This event could lower the value of any potential Mike fight if Holyfield doesn’t look good."

The fight, billed as “Tyson vs. Holyfield 3,” was set for May 29 in Miami before negotiations stalled. Holyfield won the first two bouts, and lost a piece of his ear when Tyson chomped it off during their rematch in 1997.

In November during an eight-round exhibition, Tyson fought Roy Jones Jr., to a draw in his return to the boxing ring at age 54.

With Tyson at least temporarily out of the picture, Holyfield has chosen to fight the last man to beat Tyson. McBride scored a TKO against Tyson in 2005, when Tyson failed to come out for the seventh round.

It was the last fight of Tyson’s pro career.

“So if you can’t fight Tyson, you got to fight the last guy that knocked him out,’’ Lawrence said. “It’s not like Evander went deep into the well and found some geriatric guy."

McBride, 47, is nine years younger than Holyfield. He fought last in 2011, when he was knocked out in the fourth round Mariusz Wach.

Holyfield also fought last in 2011, when he beat Brian Nielsen with a 10th-round TKO.

The Holyfield-McBride fight is scheduled for eight, two-minute rounds and will be held at Marlins Park.

How Arsenal could line-up against Tottenham with Lacazette to continue up front, Nketiah suspended and Pepe back in XI

What bizarre sports used to be part of the Olympics?