Australian UFC middleweight world champion Robert Whittaker is "pumped'' for his highly anticipated unification bout against Kiwi Israel Adesanya at UFC 243 in Melbourne and determined to silence the critics who have attacked him over his year-long absence from the octagon.

"After what happened last fight, it left a bitter taste in my mouth. It lit a fire in me. I am hungrier than ever  to step into that octagon and get to work," Whittaker said.

"To go back to Melbourne, where I believe they are owed a fight, on a bigger scale with an opponent bringing more hype, more popularity and from this part of the earth, I think is great. I am pumped."

Whittaker suffered a life-threatening hernia at UFC 234 in Melbourne in February and was forced to withdraw from a fight with American Kelvin Gastelum.

Adesanya  stepped up in Whittaker's absence to take top billing on that Melbourne card, where he defeated Brazilian legend Anderson Silva. While Whittaker was recovering, Adesanya defeated Gastelum to become the interim titleholder.

Whittaker has  not fought since beating Yoel Romero at UFC 225 in Chicago in June last year. 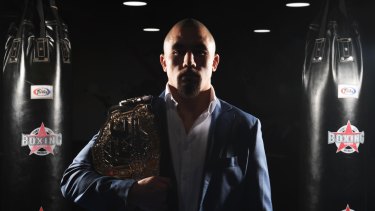 Robert Whittaker is hungrier than ever to make his comeback against interim titleholder Israel Adesanya. Credit:Nick Moir

"It’s not by choice, I want to fight. This is what I do for a living. It’s just that I haven't been able to," he said.

While the injury was disappointing, the man they call 'The Reaper' said it was a "blessing because I didn’t die".

"I was left unfulfilled because I didn’t fight," he said. "Once I recovered from the initial surgery, I went straight back to the gym. I focused on rehab and preconditioning.

"I doubled up on my healthy lifestyle changes – cleaning up my diet even more, making sure I am hitting my nutritional goal. I am better than I have been, I am fitter, stronger and healthier than I have ever been."

Despite their proximity, it's the first time Whittaker will cross paths with Adesanya, who is known for his unique fighting approach. But Whittaker's not worried.

"My fighting style is unconventional as well. I am going to do what I am good at. I am training my hardest, best I have ever been, hardest I ever have. I am going to bring my own level of threat to him," Whittaker said.

"I understand Adesanya’s skill set – he has a great skill set. He's a great fighter. His stand-up game is great, but I'm good at stuff too."

The pair will meet in the main event of UFC 243 on October 6 at Marvel Stadium. Several fights are still to be confirmed for the undercard.

The 5 best Amazon deals you can get this Monday