With just two weeks remaining in most fantasy football leagues' regular seasons, teams still in contention for the playoffs should be thankful for a full slate of games in Week 12. With no byes to worry about (until next week), we can stuff our rosters with players from every team on the menu.

First of all, a quick look back to Week 11, when the No. 1 topic in fantasy football was Taysom Hill getting the nod as the Saints’ starting quarterback – while also being eligible in some leagues (ESPN in particular) as a tight end.

Congratulations to fantasy managers who were able to take advantage as Hill outscored all other tight ends in standard scoring (and all except Travis Kelce in PPR).

Unfortunately, the gravy train is over. ESPN has rescinded Hill's eligibility there.

However, it's also worth noting that after passing for 233 yards, rushing for 51 and scoring two touchdowns, Hill was the No. 3 fantasy quarterback in Week 11. And he projects to be a QB1 again this week at Denver. That's 2020 for ya.

Now, turning to this week's waiver wire, it just might be time to reacquire some former starters who had previously fallen out of favor.

Previously, we recommended bids based on a free agent acquisition budget (FAAB) of $100 for the season. But at this late stage of the season, if you have any funds left, use them any way you can to strengthen your roster! 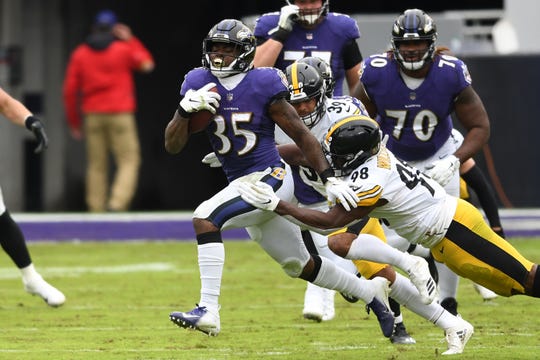 Ravens running back Gus Edwards rushed for 87 yards and a touchdown against the Steelers in Week 8. (Photo: Mitchell Layton, USA TODAY Sports)

RB Gus Edwards, Baltimore Ravens. With both Mark Ingram and J.K. Dobbins out on Thanksgiving night after testing positive for COVID-19, Edwards takes over as the Ravens' primary back. Before dismissing him because the game is at Pittsburgh, remember Edwards had his best game of the season in Week 8 against the Steelers. In deep leagues, backup Justice Hill could even be worth adding in case Ingram and/or Dobbins are out for multiple weeks.

WR Allen Lazard, Green Bay Packers. The Packers’ No. 2 wide receiver to start the season, Lazard returned from core muscle surgery on Sunday with a pair of catches. He’ll have a much larger role in the offense going forward.

RB James White, New England Patriots. White took over the receiving role on Sunday after Rex Burkhead exited with what turned out to be a season-ending knee injury. White was targeted nine times, catching six, for 64 yards. Sony Michel (quad) will likely to return to action for the first time since Week 3, but he could split touches with Damien Harris. White has the best path to fantasy success.

WR Damiere Byrd, New England Patriots. The Pats receiving corps is becoming almost as unpredictable as the backfield. For a couple weeks, Jakobi Meyers looked like the primary wideout. But it was Byrd’s turn at Houston in Week 11. He caught six passes for 132 yards and a touchdown. That kind of production is intriguing.

RB Chris Carson, Seattle Seahawks. Carson should be active on Sunday for the first time since suffering a foot injury five weeks ago. However, Carlos Hyde was solid last Thursday after his own three-week absence – rushing for 79 yards and a touchdown. Grab either one, if available. If both are still out there, target Hyde If you need immediate help; go with Carson if you’re looking for a potential playoff starter.

TE Jordan Reed, San Francisco 49ers. With the Niners on bye last week, Reed may be available in many leagues. He had a season-high 62 receiving yards in his last game … and George Kittle isn't walking through that door anytime soon. If you need a dart throw at tight end (to replace Taysom Hill, perhaps?), Reed has a decent schedule the next several weeks.

RB Kerryon Johnson, Detroit Lions. The Lions don't expect to have D'Andre Swift (concussion) active for their traditional Thanksgiving Day opener, and veteran Adrian Peterson doesn't seem to have anything left in the tank. Johnson has shown some flashes before and, unlike Peterson, he can be a weapon in the passing game.

WR Breshad Perriman, New York Jets. Perriman has missed four games due to injuries, but when he has played he actually has been pretty good. He had another long touchdown last week and QB Joe Flacco seems content to air things out on a regular basis these days.

For additional players who could still be available in your league, check out last week's waiver wire picks. And follow Gardner on Twitter @SteveAGardner.