For the Melbourne Vixens, 2020 is a matter of now or never.

Having been the form team of the year – they wrapped up the minor premiership three rounds before the end of the regular season – they face the challenge of being the first minor premiers to win the title in Super Netball history. 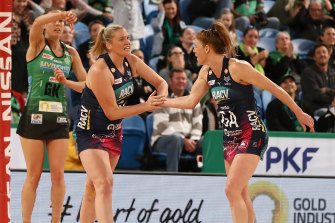 This challenge has taken on a new meaning with the announcement that two stars will hang up their bibs at the end of this year.

Caitlin Thwaites and Tegan Philip announced this week that the 2020 season will be their last in the Vixens dress. The significance of this cannot be underplayed. Not only are they two of the most experienced players in the Victorian team’s line-up, they are vital parts of the attacking line who will leave a gaping hole when they are gone. Their retirement gives a renewed sense of urgency to the 2020 quest to become champions.

Having not won a national league title since their 2009 triumph in the now-defunct trans-Tasman league, the Vixens will be desperate to send off their retiring stars in style. Thwaites was a member of that 2009 side, forming a formidable goaling circle with the legendary Sharelle McMahon.

Following that win Thwaites left the club, plying her trade in New Zealand and later with the NSW Swifts and Collingwood Magpies. She has had to draw upon all of that experience this year when, at the ripe old age of 33, she was asked to make the move out to goal attack to create space for Malawi superstar Mwai Kumwenda. 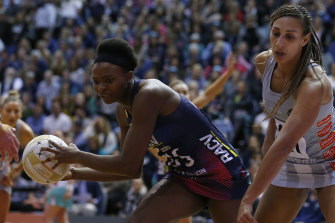 The move has paid dividends for Vixens, but has meant that there was no room on court for Philip. In her usual unassuming way Philip has played the support act, subbing in to give Thwaites a break when needed. Always a smile and no sign of a spat dummy.

Yet this finals series will be about more than sending Thwaites and Philip off in style. Given they are finishing this year, it is likely that this will be the Vixens' last chance for some time to win the one thing that eludes the club – a Super Netball title.

It is something that they have promised to do a couple of times but never succeeded. After finishing the inaugural 2017 season as minor premiers, they crashed out in straight sets, losing both finals and the chance to make history. The following year they failed to make the finals, while last year they finished third. After beating Magpies in the minor semi, they were humbled by eventual premiers the NSW Swifts in the preliminary final.

Yet here they are, on the precipice of greatness again. The Vixens are, along with fellow finalist West Coast Fever, the most stable team in the competition, with seven athletes still in the team from the inaugural 2017 Super Netball season. That is a remarkable retention rate and should hold them in good stead for the upcoming finals series.

The statistics suggest they should go into the finals as warm favourites. If the saying that attack sells memberships and defence wins championships then the Vixens look good on both fronts.

They have the best wing attack in the world feeding one of the most prolific goalers in Kumwenda who has a 91 per cent shooting average for the season. They are hard to get the ball off – they make fewer unforced turnovers than any other team and throw significantly less passes that get intercepted.

While these stats are impressive it remains to be seen whether they are enough to overcome the oppressive weight of a club who have, by their own lofty expectations, under delivered in the past three seasons.

And in the end it may not be the stats that get them there. In speaking with the team and with coach Simone McKinnis about the season, there is a desperate desire to win the title for Victoria.

They are determined to give the netball community in their home state a reason to celebrate after a miserable year of pandemic and lockdown. If they can send off two of their greatest servants in winning style then that would be a bonus.