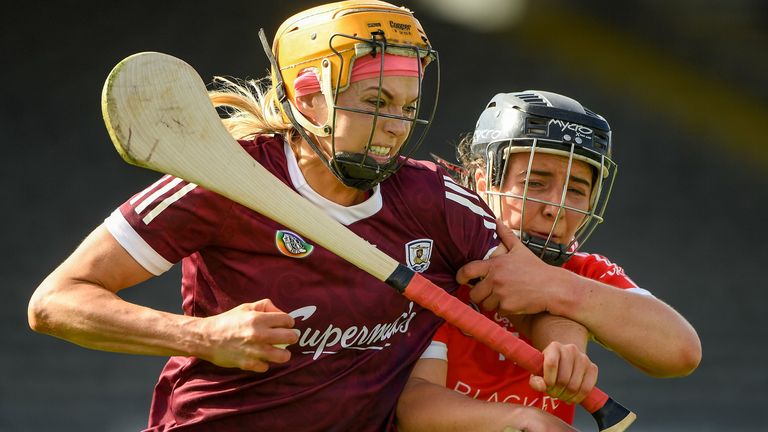 Galway and Kilkenny are set for a repeat of the 2020 All-Ireland final, after National League semi-final wins on Sunday.

It wasn’t pretty at times but the relocation of Aoife Donohue to the inside line was just about the deciding factor as Galway gritted it out in a war of attrition against Cork to set up a mouth-watering Littlewoods Ireland Camogie League Division 1 final at Croke Park next Sunday night.

That will be a repeat of last December’s All-Ireland final, in which the westerners finished off second best and they won’t want for motivation. They are the defending champions too, having won the last final in 2019.

If Kilkenny will be looking for an improvement after their slightly fortuitous defeat of Tipperary, so too will Galway, even if no one could argue with their two-point success.

This was a much scrappier affair than the fluid game we had in the first semi-final, with lots of frees, many of which were missed, and just a lack of accuracy in passing, control and shooting.

The exchanges were robust to say the least however, and there was no doubting the hunger of both sides to be playing under lights in front of up to 5,000 people at HQ.

Katrina Mackey had a point for Cork after 15 seconds but Carrie Dolan shot the next three points, including two from placed balls.

Catherine Finnerty was only on the field a matter of seconds for Galway, in place of the injured Orlaith McGrath, when she pounced on a loose ball after Laura Treacy gave goalie Amy Lee a lot to do.

Finnerty played the hand-pass to Siobhán McGrath and the Sarsfields poacher drilled to the net cleverly on the half-volley in the 13th minute, realising she would have been hooked with a regular strike out of the hand.

Cork’s 26th minute goal got them back into the fray however, and it was something they would have been working towards, getting Amy O’Connor into space and utilising her Olympian speed. 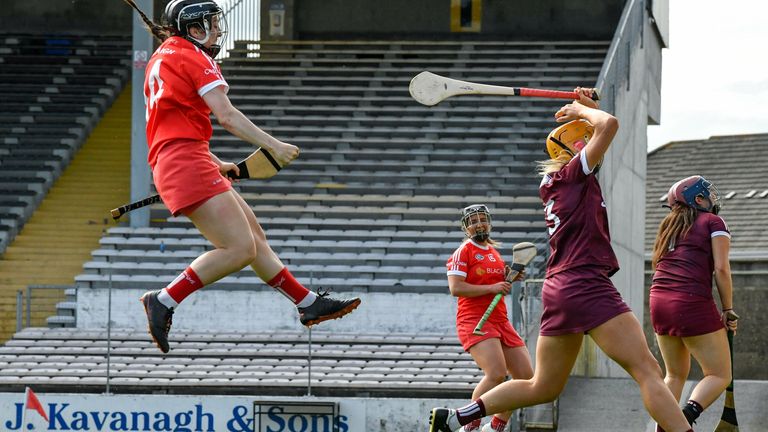 Paudie Murray will be delighted that it started with O’Connor’s work-rate as she dispossessed Sarah Healy 50m out and tight to the right sideline.

Fiona Keating provided back-up to gather possession and transferred to Ashling Thompson, who spotted O’Connor on the move. Once the hand-pass found its target, O’Connor was able to solo almost 30m with Emma Helebert chasing, before unleashing a shot that flew beyond Sarah Healy.

It was the Galway custodian’s first concession this season and she might not have been helped by the slight deflection off the retreating Sarah Dervan.

Laura Hayes and Niamh Kilkenny swapped points afterwards, then Cronin and Dalton slotted frees before Thompson stole forward well just before the short whistle and split the posts confidently to make it 1-7 to 1-6 at the break.

It was Galway that found a bit more rhythm after the restart, even if Ciara O’Sullivan extended the margin to two early on.

Although it was three points from Dolan frees that moved Galway ahead by the 40th minute, that was as a result of increased pressure and they were definitely more threatening at this juncture.

Donohue was now situated in the left corner and her point, within seconds of Dolan’s third placed ball, was a testament to economy with a neat finish.

Cork offered a reminder to what they were capable of when creating a glorious goal chance but on this occasion, Thompson was unable to source O’Connor with her stick pass. Keating cleared the black spot, however. The Rebels were going nowhere.

Dolan pointed from play before Donohue was fouled for a penalty in the 49th minute after a glorious bit of skill.

At first, the diminutive attacker won a ball she wasn’t favourite for. Then she spun Libby Coppinger and flicked the sliotar over the advancing Ellen Murphy, taking it back on the hurley without breaking stride. Her progress was halted illegally however but Dolan opted to take a point from the resulting award.

It was frantic stuff in the closing minutes, as Cork poured forward, their bench having a significant impact.

Substitute Saoirse McCarthy had a point, after a heavy tackle on goal-bound O’Connor went unpunished. Siobhán Gardiner made a brilliant hook on Izzy O’Regan.

With two minutes left Cork were awarded a penalty for a foul on Thompson but Sigerson’s low drive found the advertising hoarding rather than the net.

Mackey made it a one-point game however, before another sub Cliona Healy, hitting a delicious point over her left shoulder, the sliotar dropping over off the inside of the upright.

There was a chance late on for a winner as Sigerson bore down on goal but her hand pass couldn’t find a teammate and we were headed for an additional 20 minutes.

Having gone so close to losing it, Galway outscored their opponents by four points to one in the first period of extra time, Donohue providing two of them.

Dolan was given her marching orders for a second yellow card in the 74th minute and Cork sensed an opportunity.

O’Connor and Healy (free) left just the minimum between the sides but just as everyone was considering the prospect of another chapter, Rebecca Hennelly slotted her second point after coming on at the start of extra time to ensure that Cathal Murray’s squad would progress.

Two goals in a minute from the inspirational Denise Gaule and Katie Nolan, five minutes from the end of normal time snatched victory for Kilkenny in a dramatic clash at Nowlan Park.

The loss will leave Tipperary brokenhearted however, after a near faultless display of intensity and clever camogie, that had the All-Ireland champions in disarray and playing second fiddle for the majority of proceedings.

Cáit Devane had given an exhibition in the first half, scoring eight points, four from play and most of the placed balls coming for fouls she had enticed. That this came with one of the game’s best markers, Davina Tobin picking her up only added to the stature of this performance.

Devane travelled deeper in the second half but Emer McGrath was proving an effective target and having weathered the expected third-quarter storm, had again wrested control with points from Grace O’Brien, Sarah Fryday and McGrath, and then a Devane brace in response to two Gaule scores, to open up a five-point gap in the 54th minute. Gaule’s goal a minute later was the crucial score. That she shot, from just outside the 20m line and a little to the left of the arc, was indicative of the trouble her side were in. It had plenty of purchase but Tipp goalie, the All-Star Áine Slattery looked to have it covered as she stuck up her hand.

To the young netminder’s horror, the power of the strike caught her by surprised, and flew into the net off her fingers.

Devane hit back with her 11th point and fifth from play immediately but from that puckout, Nolan was able to finish with a low shot and the teams were level.

Even then, Tipp showed plenty of character. First Ereena Fryday and then Orla O’Dwyer, introduced at half-time for her first appearance since winning an AFLW title in Australia, put the Premiers in front but Gaule was unerring at the other end, levelling on each occasion from frees.

And it was the Noresiders, who have been in similar situations often in the past, who found the decisive scores, Gaule calmly pointing two more frees to bring her tally to 2-8 and secure a famous victory. It all looked unlikely as Devane capitalised on her team’s dominance to give a performance for the ages in the first half.

Kilkenny’s problems went further than that however, as they were second best in most of the physical exchanges.

What was impressive about Tipp was their use of the possession. It was considered, to a plan and Tobin had to contend with torrents of ball coming down the throat of one of the most talented forwards camogie has seen.

With the strength to go with her stickwork, Devane was unmarkable with Tobin denied any support. Karen Kennedy, back from wisdom tooth surgery, Emer Loughman and Mary Ryan were also outstanding in the Tipp defence. Róisín Howard and Emer McGrath also stood out. Tipp were on fire.

The early exchanges were extremely cagey, despite Gaule getting the opening score from a free after just 41 seconds for the All-Ireland champions.

Devane illustrated the soundness of her striking with a brilliant conversion of a 50m free out on the left, but scores from Katie Nolan and a stunning point on the run by Aoife Doyle either side of a Devane seemed to indicate all was well with the Cats.

A pair of points within a minute just before the water break by Devane gave Tipperary a 0-4 to 0-3 lead at the water break and they were completely dominant when play resumed.

Howard was central to that around the middle and she extended Tipp’s lead after a neat sidestep before Devane took over, her score from 60m and another after a tremendous diagonal delivery by Ereena Fryday standing out.

Nicole Walsh marked her birthday with a point and the lead was six.

Then out of nothing, Kilkenny had a goal on the half-hour, as Aoife McGrath fouled Gaule, left in rare isolation. Just as she did in the All-Ireland final last December, the Windgap ace drilled the resultant penalty to the net.

Bill Mullaney will have been thrilled by the response of his charges to the setback however, as they hit points from Devane (free) and Emer McGrath to leave it 0-11 to 1-3 at the interval.

It was no surprise that Kilkenny, fuelled no doubt by some vociferous messaging from Brian Dowling, found another two gears after the restart and upped the ante over the sliotar. They hit the first three points of the second half, Mary O’Connell’s stupendous effort from tight to the right sideline the standout.

Tipp’s obduracy stood out once more and they looked to have steadied the ship. But Kilkenny didn’t become All-Ireland champions by accident. It wasn’t pretty, but they gutted it out.

They found a way.

Ryan Callahan retires: How he willed his way into Rangers force