GARY NEVILLE has claimed he is "delighted" Romelu Lukaku has left Manchester United – and wants everyone "who thinks they're bigger than club gone".

In the latest barb of the long-running war of words, the former Man Utd right-back claimed he hopes more follow Lukaku out of United. 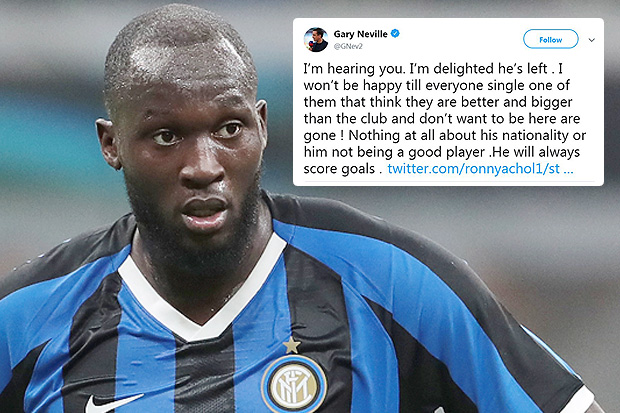 Neville was speaking on social media as his row with Lukaku rages on, having already called him "overweight" and "unprofessional".

When quizzed on Twitter about his comments towards Lukaku, Neville replied: "I’m delighted he’s left.

"I won’t be happy til every, single one of them that think they are better and bigger than the club and don’t want to be here are gone!

"Nothing at all about his nationality or him not being a good player. He will always score goals."

It was just the latest in a long-running war of words between Neville and Lukaku.

The former United right-back ignited the battle when calling the Belgian star's fitness and commitment into question.

Neville said: "He admitted he was overweight! He is over 100kg! He’s a Manchester United player!

"He will score goals and do well at Inter Milan but unprofessionalism is contagious."

Lukaku hit back though, saying: "Don't question my professionalism. I live for this game. I am at home all the time. I try to do everything to improve.

"[Neville] can talk about my fitness but he should never say anything about my professionalism, that I don't work hard enough.

"That is something he cannot say. All the coaches I have had say the same thing about me.

"What did Ole Gunnar Solskjaer say when I was on the training ground? What did he say?

"That I always work hard and always do my best to try and improve myself. Same with Jose Mourinho and Roberto Martinez. Now Antonio Conte will say it.

"Last year was just a bad year. It happens in football. You just have to move on. I am not going to sit here and react in a negative way.

"We are grown men. He is a pundit. He gets paid to say this kind of stuff. I am paid to play football. I just want to do my best for Inter Milan. That is it."