St Kilda have decided to stick with Jarryn Geary as captain as they look to atone for a disappointing 2018, but have immediately elevated Sydney Swans' premiership play Dan Hannebery to the leadership group.

Geary, 30, has been Saints' skipper for the past two seasons, taking over in 2017 from club legend Nick Riewoldt, who retired at the end of that year. 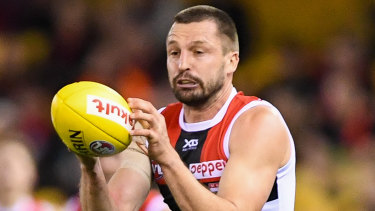 The Saints' five-man leadership group includes Seb Ross, who has been retained as vice-captain, Hannebery, Dylan Roberton, who returns this season after a heart problem sidelined him for most of last year, and key forward Tim Membrey.

A pair of Jacks, Steven and Newnes, who were part of last year's leadership group have not been selected to be part of the 2019 group.

St Kilda's lack of leadership was evident at times last year with the club acknowledging that the loss of Riewoldt and Leigh Montagna to retirement left a hole in the group that was not completely filled.

The Saints were aggressive during the trade period landing Hannebery, a premiership Swan, on a five-year deal. They also grabbed Max King at the national draft and appointed Brett Ratten and Brendon Lade as assistant coaches.

"Gears has great balance in his leadership," Richardson said.

"He is able to be really challenging of the group and at the same time be very supportive of his teammates.

"I haven’t seen any player in my time in coaching who so regularly sacrifices himself for the team."