Giants coach Julie Fitzgerald has partly blamed time spent in hotel isolation during a mentally draining trip to Perth last week for her side’s 51-63 loss to the NSW Swifts on Sunday.

The Swifts dominated each quarter of the NSW derby in front of 8150 spectators at Ken Rosewall Arena, forcing an increasingly desperate Giants side to make 14 attempts at the two-point Super Shot to make up the margin. But they only managed to sink six. 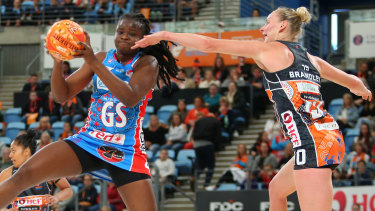 The Swifts’ Sam Wallace is challenged by April Brandley at Ken Rosewall Arena.Credit:Getty

“We’ve all had a huge week. We didn’t get home until Tuesday. There is a lot of things that contributed to it. But if you’re going to be a professional you’ve got to be over that,” Fitzgerald said.

The Giants were still in the air en route to Perth for their clash against the West Coast Fever when entry restrictions into Western Australia were changed last week. The club was forced into five days of hotel quarantine before the game, because they had played the Melbourne Vixens the week before and were deemed a COVID-19 risk.

Last week, Giants captain Jo Harten said the side had felt liked “caged animals” during their time in quarantine, and Fitzgerald admitted she had concerns there would be lingering effects. The league leaders only lost by one point to the Fever, but have now suffered two losses in a row. 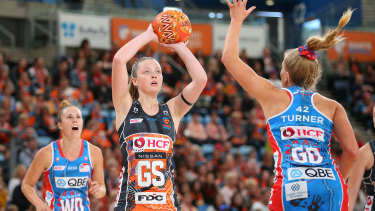 Sophie Dwyer of the Giants shoots for goal.Credit:Getty

“You can’t afford for that sort of thing to affect you. You’ve got to get over it. We are in a pandemic, anything can happen to us, we’ve got to be prepared for it,” Fitzgerald said.

The Swifts didn’t attempt a single Super Shot at Homebush, preferring to rely on the shooting of Sam Wallace, who sank every one of her 58 attempts on goal.

Coach Briony Akle said it was the best game the Swifts had played since winning the 2019 grand final. The NSW side have now bagged their first back-to-back wins of 2021.

“For us to go back to that brand of netball of keeping possession and being smart about it [is the ideal],” she said. “We didn’t have those brain explosions and just throw long balls for the defender to read too easily.” 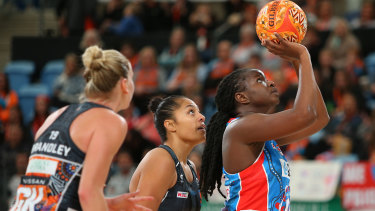 Sam Wallace shoots one of her 58 goals in a perfect performance for the Swifts.Credit:Getty

Proud spent a significant amount of time splayed out on the court throughout the match – a worry given Sunday was her first match back in two weeks due to a foot injury.

“Jamie is obviously a very physical player, she is very strong but I think I probably gave as good as I got today,” Proud said.

“It’s always a physical battle when you play the Giants. There is always that bit of extra rivalry, extra fierceness that comes into the game.”

Backed by a boisterous crowd, a hotly contested first quarter ended with the Swifts in front 18-17.

The Giants began to slip in attack in the second half, but three consecutive Super Shots from Sophie Dwyer ensured they stayed within range as the Swifts took a 36-32 lead to half-time.

But the home side failed to capitalise on the effort from Dwyer and the third quarter proved to be the Giants’ worst 15 minutes of the 2021 season thus far – scoring just nine goals.

That horror quarter meant the Giants entered the final 15 minutes trailing 41-49 on the scoreboard.

The Swifts’ smart play continued into the last quarter and the Giants were unable to match the visitors’ skill level.