Kiera Austin was on top of the netball world when she went down with her first serious injury during the Giants’ first game of the 2021 season.

The 24-year-old had entered the campaign on the back of a stunning Diamonds debut during the Constellation Cup Series in March to secure her place as Australia’s newest shooter. But her rise to the top ended in a split second after she went down against the Thunderbirds.

Austin was ruled out for the season, forcing her to watch from the sidelines as her team lost the 2021 grand final to the Swifts 63-59 last month. 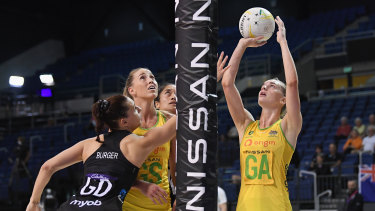 With her experience in big games and her growing reputation as one of Australia’s best shooters, it’s hard not to wonder if the result in the Super Netball decider could have been different if Austin was on the court.

Austin was replaced in the goal attack position by Sophie Dwyer, who, despite doing an incredible job all season, is just 19 years old.

“My year this year was definitely in that goal attack-wing attack space and that’s probably where, dare I say, they lost a bit of diversity when I went down,” she said. “A lot of those girls in that grand final were playing their first final.

“But I think I’ve learned that you can’t really rely on what ifs. What if I didn’t make that dive … I might have not done my ACL. You could put it down to a lot of things. But, in the end, I think there were a lot of nerves on that grand final day and the Swifts turned up better.” 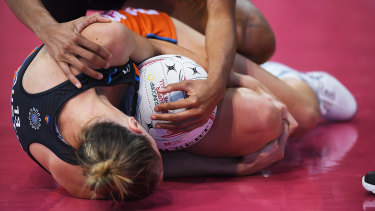 It has been four months since Austin’s surgery and she is back running. In the back of her mind is the 2022 Commonwealth Games in July and a gold medal for Australia.

“That would be obviously such a huge milestone for me,” she said. “It’s certainly in the back of your mind, but my first goal is to just get back on the court again.

“They say that absence makes the heart grow fonder and time away from the sport has reminded me how much I love it.”

The club is now waiting to see whether Sophie Dwyer will remain at the Giants if Austin is set to make it back for the 2022 season.

The Super Netball transfer window is open with the Giants on the hunt for new defenders after losing Sam Poolman and vice-captain Kristiana Manu’a.

Poolman announced her retirement last week, while Manu’a has signed with the Central Pulse in New Zealand’s ANZ Championship.