FORT WORTH — Sarah Jantzi, an elite gymnastics coach and the whistle-blower in the biggest sexual abuse scandal in sports history, trains her athletes using an approach that for years some fellow coaches considered unconventional.

When her current national team gymnast, Grace McCallum, is too tired to train in a productive way, Jantzi sends her home to rest. When she is injured, including when McCallum broke a bone in her hand in January needed a plate and seven screws to stabilize it, Jantzi tells her to return when she feels healthy. If McCallum is frustrated for any reason, like her recent three-inch growth spurt or even Jantzi’s coaching, Jantzi encourages her to discuss it.

And when McCallum, 18, makes mistakes, which athletes are apt to do in such a demanding and dangerous sport, Jantzi reminds her that no one is perfect. That includes Simone Biles, who on Sunday easily won her seventh national championship in the all-around.

And it includes coaches.

“If I had a bad day and maybe was up late with my 4-year-old and didn’t react the way I would’ve liked to in practice, I will always come back to my athlete to apologize,” Jantzi said Sunday after McCallum finished tied for seventh in the all-around, high enough to qualify for the Olympic trials later this month. “I feel totally comfortable talking to them as real people who have a voice and opinions.”

She added, “When other people see successful athletes with positive coaches, I think everyone realizes that, hey, OK, it actually can be done this way.”

For decades, the concept of coaches treating athletes like humans and not robots was foreign to elite gymnastics, which celebrated tyrannical coaches who scared their gymnasts into subservience. Obedience and silence were thought to forge medal winners.

But the Lawrence G. Nassar sexual abuse scandal has forced the sport to at least demonstrate an effort to change. Nassar, the national team doctor, molested hundreds of athletes under the guise of medical treatment.

With a floodlight now focused on the sport and the way it treats its athletes, some coaches are trying to work more like partners to their athletes, as Jantzi does, and less like unquestioned dictators, as Martha and Bela Karolyi, the longtime national team coordinators, did.

The newfound autonomy of the gymnasts was evident at the United States Gymnastics Championships in Fort Worth, where the group of 18 gymnasts chosen to compete at Olympic trials later this month ended the meet by dancing together as the “Cupid Shuffle” blared throughout the arena. Their impromptu show of joy encapsulated this new era of gymnastics in the United States as some athletes and coaches are proving that the sport doesn’t have to be so rigid and that there were many ways to achieve success. 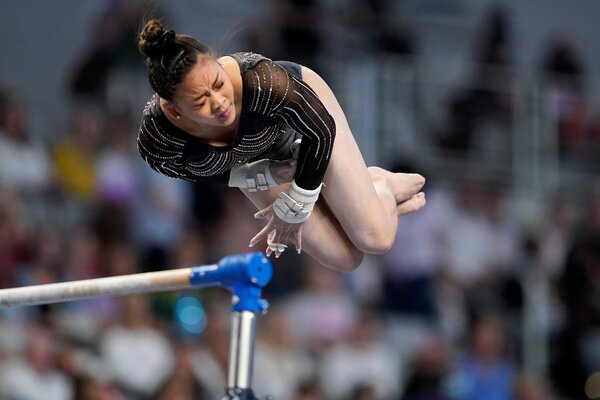 Sunisa Lee, of St. Paul, Minn., finished second in the all-around after taking months off because of gym closures during the coronavirus pandemic and subsequent injuries. She proved that time away from grueling training at the gym — once considered unthinkable for elite gymnasts — could actually be beneficial. Lee won the uneven bars competition at nationals and her performances included a high-flying, complicated routine considered the most challenging in the world.

Jordan Chiles, of Vancouver, Wash., was third in the all-around, just two years after taking a huge chance and changing gyms to join Biles at the World Champions Centre in a Houston suburb. She was in search of nurturing, positive coaches, and said she found them in the coaching couple, Cecile and Laurent Landi. She called them “the dopest people I’ve ever met in my whole life,” and added that the energy at this national championship was “definitely different” than it had been in the past.

Jantzi has not changed her approach to coaching in the six years since she reported Nassar to U.S.A. Gymnastics for inappropriately touching one of her gymnasts, Maggie Nichols, during treatment sessions. At a national team training camp in June 2015, Jantzi overheard Nichols and the Olympian Aly Raisman discussing the invasive way Nassar touched athletes during examinations. Jantzi grilled Nichols about the details, and Nichols felt comfortable enough with her to share them.

Her revelation set into motion the downfall of not only a serial molester, but also of U.S.A. Gymnastics, the national governing body of the sport, which once held much power and prestige.

Two former U.S. Olympic team coaches — John Geddert and Marvin Sharp — killed themselves in recent years after being accused of abusing young gymnasts. Steve Penny, the former chief executive and president of U.S.A. Gymnastics, was fired in 2017 and is facing felony charges in Texas of tampering with evidence in the Nassar investigation.

U.S.A. Gymnastics’ usual roster of sponsors, which has included consumer product giants like Procter & Gamble and Kellogg’s, disappeared from the sport, leaving a thimbleful of smaller backers, including GK, the leotard company, and Hyperice, a company that makes equipment to aid recovery from workouts.

Facing reduced financial support and the weight of hundreds of lawsuits filed by Nassar’s victims, the gymnastics federation filed for bankruptcy protection in December 2018. Its future viability remains unclear.

‘It was kind of brutal.’

One glance at the competition floor at the women’s event on Sunday revealed yet another glaring change: No Karolyis.

Martha Karolyi retired after the 2016 Games, so she wasn’t on the sideline. Wasn’t in the stands. Wasn’t staring at the gymnasts who desperately wanted to, or needed to, please her and make the Olympic team.

“You always knew where Martha was sitting and you could feel her eyes on you,” said MyKayla Skinner, an alternate for the 2016 Rio Olympics who was ninth at nationals and will compete at the Olympic trials. “To say she was intimidating and that it was stressful when she was around, well, that’s a big understatement.”

In a separate interview this month, she added, “I feel like the way Martha did things, it was kind of brutal and it didn’t need to be that way.”

Tom Forster, the current women’s high-performance team coordinator for U.S.A. Gymnastics, instilled a new mind-set when he began leading the national team in 2018. The idea, he said, was to treat the athlete not as a commodity that could bring home medals, but as a person.

Jordan Chiles’ mother, Gina, said on Saturday that Forster also had made an effort to include families in their daughters’ elite careers. He has made himself available to parents, she said, something that never happened under the previous national team regime. “Parents are in the loop now,” she said, “and that makes us feel great.”

Forster was so concerned with the physical and mental well-being of his national team athletes after the Olympics were postponed last year that he started showing up at their gyms to check in on them. He wanted to be there to answer questions, he said in a video call this month, particularly about the Netflix documentary “Athlete A,” which aired last summer.

The film, which focused on the Nassar case and U.S.A. Gymnastics’ attempted cover-up of the scandal, had prompted gymnasts around the world to speak publicly. (In early court documents in the Nassar case, Nichols, the first victim to come forward, was referred to as Athlete A to protect her anonymity.)

Skinner said that when Forster first popped into her Arizona gym, she had to blink a few times to make sure she wasn’t imagining things. Martha Karolyi would have never checked in like that, Skinner said.

“Tom has been awesome; he’s been so supportive,” she said. “It’s so weird having a relationship with an Olympic coach and being able to talk to him.”

Lee, the champion on the uneven bars, has said she feels at ease with Forster in charge. “I was too scared to ever say anything before,” she said. “But Tom’s really nice and knows how to keep us healthy. He actually cares about what we think.”

‘I’m a person first, and a gymnast second.’

Now that athletes feel comfortable enough to speak up, there might be no stopping them, said Jennifer Sey, a former national champion in the all-around event and a producer of “Athlete A.” So many people outside the sport watched the film and were appalled at how gymnasts were treated, she said, that the athletes themselves finally began to understand that they deserved better.

Sey described it as sunlight pouring in, finally. And it doesn’t matter, she said, if U.S.A. Gymnastics is on board with the changes.

“The whole abusive culture was contingent on it being very closed off from the world, including from your own parents,” Sey said Friday in a phone interview. “Now, especially with social media, I think it’s an unstoppable push and movement for every individual to use their voice.”

For years, Biles refrained from speaking out on social media, she explained at a training camp last year, and began using her voice only after winning four gold medals at the 2016 Olympics. For the longest time, she said, she suppressed her emotions and opinions because the sport called for that.

But now, Biles said, she sees the value of her words.

“Over the years, it’s just kind of grown,” she said. “Right before the Olympics, I didn’t think anybody would really listen or care, especially it not being an Olympic year and me being a gymnast. We don’t have the power that, like, basketball or football players have.”

It took Morgan Hurd, who was adopted from China as an infant and became the 2017 world champion in the all-around competition, a lifetime to become confident expressing herself publicly. When Nassar survivors began speaking out, it motivated her to do the same.

Though she still worried that speaking about a social issue might hurt her chances for Tokyo, Hurd attended protests after George Floyd was murdered last year. When violence surged against Asian Americans within the past year, she gave a rousing speech at a rally in New York City, microphone in hand, calling for unity in the fight against racism.

“I just really thought to myself too that all of these things are so much bigger than gymnastics,” she said this month. “I’m a person first, and a gymnast second.”

Hurd was echoing the belief that guided Jantzi after she overheard Nichols and Raisman talking about Nassar.

After speaking up about her abuse, Nichols wasn’t named to the team for the 2016 Rio Games. Jantzi won’t say whether she thinks U.S.A. Gymnastics left Nichols off to retaliate. She can never know the truth, she said. But it wouldn’t change the way she went about the situation. Her athlete’s safety was at stake, and protecting her was more important than a spot on Olympic team.

“You want your athletes to feel comfortable talking to you about anything and everything, and that’s how Maggie felt about me,” Jantzi said. “Now I think the sport is moving in the direction of treating athletes as people. I’m not head of U.S.A. Gymnastics, so I don’t know for sure, but I have this gut feeling, and my gut feeling is usually right.”

Opinion: Gymnasts Laurie Hernandez and Morgan Hurd using their platforms to speak for others