Some gymnasts tell of sexual abuse. One says her coach would “have an erection which I could feel him pushing repetitively on my hips or back while grunting and sighing”.

Others tell of rampant body shaming. “Signs of pubertal growth were considered a failure to control weight,” one says. “Sometimes I got mum to wrap me in Glad Wrap to make me sweat more,” says another. 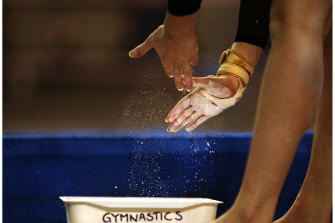 The Human Rights Commission has released a scathing report on gymnastics in AustraliaCredit:Vince Caligiuri

Then there was the physical abuse. “When they stretched us, the rules were, you know, if you cried the stretching would last longer and it would be more painful,” says a former gymnast. “I had a grown adult sit [with all of their weight] on my kneecaps while my heels were placed on an object 30-50 cm tall, for minutes at a time on a daily basis.

“The coach stretched me to the point I wanted to die.”

These are just some of the abuses detailed to the Australian Human Rights Commission’s investigation into gymnastics in Australia, led by sex discrimination commissioner Kate Jenkins. The long-awaited reported, released on Monday, paints a devastating picture of systemic dysfunction in the sport.

It finds that current coaching practices “create a risk of abuse and harm to athletes” and that there is “insufficient focus on understanding the full range of behaviours that can constitute child abuse and neglect in gymnastics”.

It also finds that a winning-at-all-costs focus caused gymnasts to feel like “commodities” and silenced their voices, and has resulted in “an increased risk of abuse and harm with significant … impact on gymnasts”. It also finds a focus on the “ideal body” which can result in eating disorders long after gymnasts finish with the sport.

“Gymnastics at all levels has not appropriately and adequately addressed complaints of abuse and harm and are not effectively safeguarding children and young people,” the review finds. “Contributing factors include a lack of international expertise and resources and complicated government structures.”

In launching the report, commissioner Jenkins said: “There is a spotlight on the human rights of athletes around the world and many of the lessons of this review are critical to all sports in Australia. This is an opportunity for gymnastics in Australia to lead the way on child safety and gender equality.”

Gymnastics Australia, which commissioned the report in August last year, responded immediately. “Gymnastics Australia unreservedly apologises to all athletes and family members who have experienced any form of abuse participating in the sport,” it said in a statement. “We also thank the athletes and other community members who engaged in the review process and acknowledge their bravery in doing so.

“The report is confronting, identifying systemic issues that affect athlete experience and wellbeing at all levels of the sport including a focus on ‘winning-at-all-costs’, silencing of the athlete voice, an unhealthy focus on the ‘ideal body’, particularly for young female athletes, and an acceptance of archaic and authoritarian coaching practises.

“The report also references experiences from members of the gymnastics community of abuse that are deeply concerning.”

There are about 231,000 athletes involved in gymnastics in Australia. About 77 per cent are female, and 91 per cent of those under the age of 12.

The commission conducted 47 interviews with 57 participants, including current and former athletes, their families, staff, coaches and administrators. It also received 138 written submissions.

Crisis support is available from Lifeline on 13 11 14.