ParalympicGB’s Hannah Cockroft picked up her sixth Paralympic gold medal by winning yet another T34 100m crown via a world record time of 16.39 seconds.

The 29-year-old wheelchair star came into the Games having picked up the 100, 400 and 800 metre titles at Rio 2016 and stormed to yet another victory at the Tokyo National Stadium in style.

Sunday’s race ended up being a British one-two, with British star Kare Adenegan picked up another silver medal, which the 20-year-old also won in Brazil five years ago. Australia’s Robyn Lambird clinched the bronze. 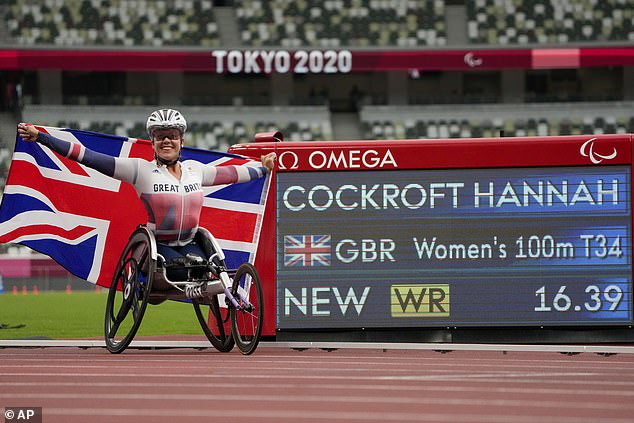 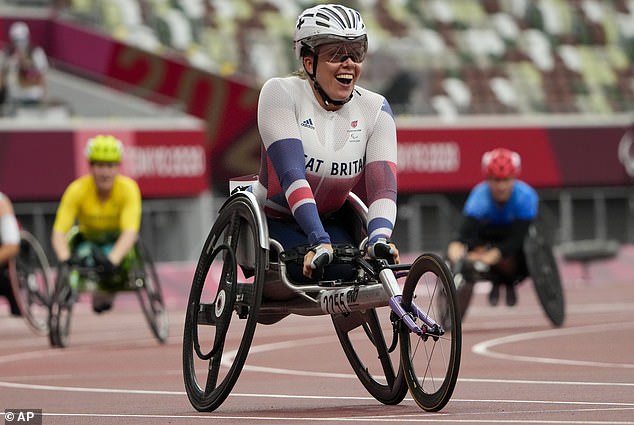 But all the glory belonged to West Yorkshire’s Cockroft who even admitted she was surprised by her record-breaking time over the weekend.

‘I honestly didn’t know that time was within me,’ she said. ‘I knew that Kare was going to move out of the blocks, and I had to go with her as best I could.

‘She just pulled a good time out of me. It has been coming, it has always been there hiding, it has just taken a few years to show its face.’

Cockroft was the clear favourite to take gold in the 100 metres event as she arrived at the Games as the only para-athlete to record a time of below 17 seconds this year out of her and her competitors. 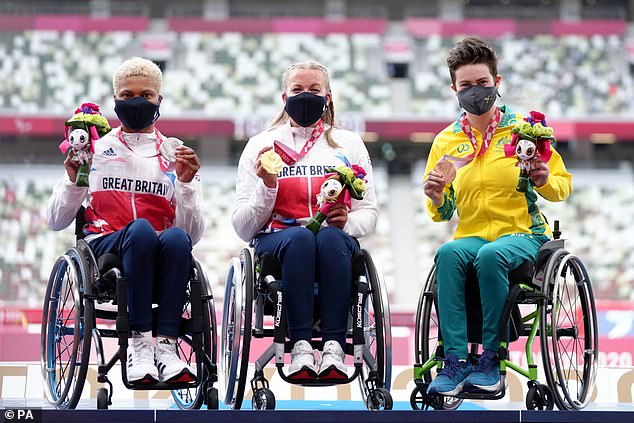 She needs five more gold medals to match Britain’s Paralympic athletics record-holder Tanni Grey-Thompson on 11, with Cockroft also the favourite to claim gold in the 800 metre event later this summer.

Asked about potentially topping Grey-Thompson’s feat, she replied: ‘I’m halfway and I’m three Games in. I’m 29, guys! I don’t know if I can do another three Games. 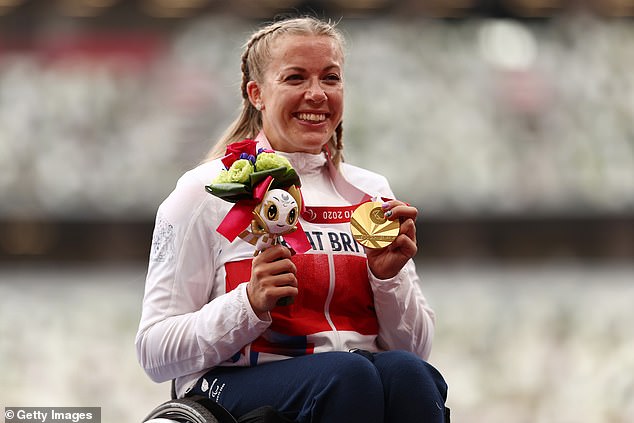 Cockroft is now five behind Tanni Grey-Thompson, who has 11 gold medals in Para-ahtletics

‘It’s there, it’s in the distance. This sport has changed so much since Tanni. She left a legacy, we just have to keep bringing more young girls into the sport. If I have to keep beating them, awesome.’

Cockroft was, however, given an almighty scare by her British team-mate Adenegan by starting strongly but the 20-year-old was caught out by the reigning Olympic champion, even though the youngster came close to her personal best time of 16.8 seconds.

Three British athletes ended up in the top five in this Paralympic final race, with Fabienne Andre further adrift from the medal-cashing pack, finishing in fifth place with a time of 19.14.

Templegate tips: These two outsiders can land a shock double at Fontwell and Hexham plus a longshot at Warwick

Anthony Joshua conditioned for 15 ROUNDS ahead of Oleksandr Usyk fight and will 'shock everybody', says sparring partner

Premier League and Championship clubs to trial safe standing in 2022