Australian coach Justin Langer has backed Shaun Marsh to regain his groove, as pressure intensifies on the stroke-maker to break out of his year-long Test funk.

Marsh's misery continued in the first innings in Adelaide when, on two, he chased a wide delivery from Ravi Ashwin in the first over after lunch and played on, the fifth time the master spinner has taken him down. 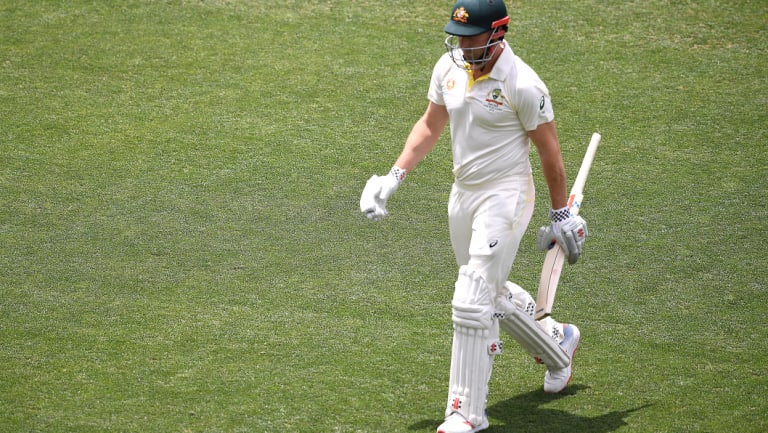 Run of outs: Shaun Marsh leaves the field after being dismissed for two in Adelaide on Friday.Credit:AAP

This has left the streaky left-hander with only 163 runs at 12.5 in his past 13 Test knocks since his 156 against England in Sydney.

Marsh, 35, will almost certainly have another chance to impress in the second innings in Adelaide and but could then face a fight to preserve his career in next week's second Test in Perth.

Langer has been a long-time supporter of his fellow West Australian, and believes he still has much to offer at the elite level.

"We know Test cricket is a tough business and he knows that. But he has also come in in incredible form. He played brilliant in the one-dayers, he played brilliant for Western Australia. Who would ever thought you would hit a ball about a metre outside off stump and chip into on to your leg stump?" he said on SEN.

Ashwin revealed after play on Friday that the tourists had dissected a weakness in Marsh's game, although the actual dismissal that unfolded could not have been planned.

That "incredible" form Langer referred to was in the Sheffield Shield, where he is the fourth-leading run-scorer this year, and his century against South Africa in a one-day international in Hobart.

However, he has failed to reach double figures in his past six Test innings (top score of seven) and has only done so twice in his past 10 knocks. This has left him as the first Australian top-five batsman since 1888 to be dismissed for single figures six times in a row. He averaged 3.5 in two Tests against Pakistan in the United Arab Emirates and only 18.37 in eight innings in South Africa in March.

The national selectors have settled on a squad for the opening two Tests so Marsh appears safe for Perth, where he is a key marketing tool in a local market that has CA already concerned about a lack of pre-match sales.

One theory is that the introverted Marsh has missed feeding off the dash of the suspended Steve Smith, whom he has replaced at No.4 in the order. However, at this stage of his career, that should not be a concern, because he is a seasoned veteran who has been through much.

His overall career average has dropped from 40 to 35 in recent months, while he is averaging only 22.76 in 13 innings in the key batting spot, compared to 42.54 with two centuries in 22 innings at No.5.

Langer, also a selector, had warned there would be "bumps" for the batting order – and the public – to deal with not just in this series but over the next two years at a time of regeneration in the Australian side.

The absence of Smith and fellow batting gem David Warner has hurt and they won't be back in the Test arena at least until next year's Ashes series. Opening batsman Cameron Bancroft, however, returns to elite cricket from December 29, and technically could return to international cricket in time for the two Tests against Sri Lanka in Brisbane and Canberra from late January.

There would not be any Shield cricket for him to find red-ball form in because of the stand-alone window of the Big Bash League but there are ways around that should the national selectors feel a change at the top of the order is required.

Langer has also backed Aaron Finch to rebound from his third-ball duck that came after he launched at a booming drive only for his middle and off stumps to be sent flying.

As debate over Finch's spot also rages, former Australian captain Ricky Ponting has questioned the selection policy behind the Victorian's selection for last month's tour of the United Arab Emirates. Ponting says Finch's weakness against a swinging red ball is well known, which shapes as an issue not only this summer but in England next year.

Langer said that during his own career he had learnt from Test great Allan Border that "there's a lot of time in Test cricket" and patience when batting was required.

"You need to bat for a long time – the great players do that. We get a bit preoccupied with how T20 goes and to an extent how ODI's go," Langer said.

That was a message he reinforced to Peter Handscomb, after the Victorian skipper dabbed at a delivery outside off stump and was caught behind.