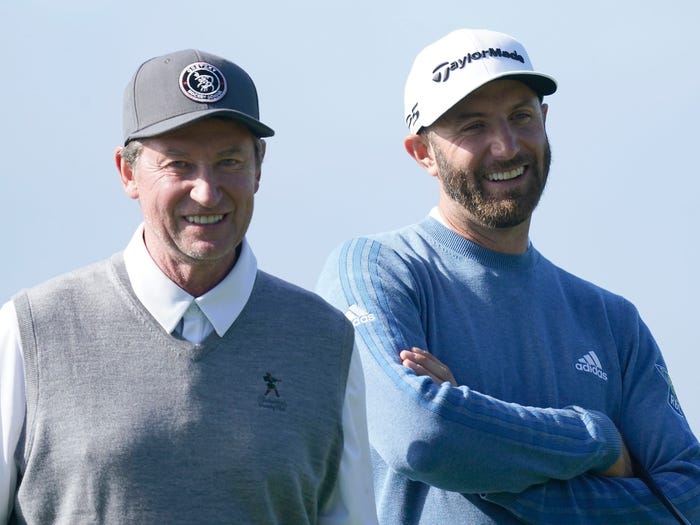 Dustin Johnson may be the champion of the moment, but the golfer's future father-in-law knows more than a thing or two about winning.

Wayne Gretzky — known to hockey fans as The Great One — is an NHL icon, winning four Stanley Cups during his illustrious career. He's also the father of Paulina Gretzky, who has been engaged to Johnson since 2013.

So after Johnson won the 2020 Masters in dominant fashion on Sunday — hitting three straight birdies en route to a new Augusta National record — Gretzky was ready to celebrate the PGA star accordingly.

In a photo shared on social media, the Canadian legend donned a replica of the signature all-white jumpsuits worn by caddies at Augusta National when Johnson came back after his feat at the iconic Georgia course. Gretzky even found a green cap with the Masters logo emblazoned on the front to complete the look.

Wayne wasn't the only Gretzky celebrating Johnson's incredible victory. Paulina was on hand at Augusta National to celebrate with her fiancé, and even gave him a kiss on the 18th hole after the final round.

And on Monday, after raking in $2 million in prize money for his win, Johnson joined his fianceé and a group of friends on a private jet to the Caribbean to properly celebrate in paradise. Kristina Melnichenko, who is on the trip with the couple and shared the photo of Wayne Gretzky to her Instagram, shared snaps of the ongoing vacation to her Instagram. Among other activities, the group has been taking shots and playing giant jenga together.

Baynes breaks hand, out of NBA for a month