Brooks Koepka had already lost the golf tournament. Now, he was trying to protect his surgically repaired knee.

As mayhem ensued on the 72nd hole Sunday, and with security losing control of the masses as thousands of spectators stormed the 18th fairway celebrating Phil Mickelson’s historic victory, Koepka was lost in the mob along with his caddie, Rickie Elliott, for several moments before finally breaking out of the pack to safety.

“It would have been cool if I didn’t have a knee injury and got dinged a few times in the knee in that crowd because no one really gave a s–t,’’ Koepka said afterward. “Yeah, it’s cool for Phil, but getting dinged a few times isn’t exactly my idea of fun. I was trying to protect my knee.’’ 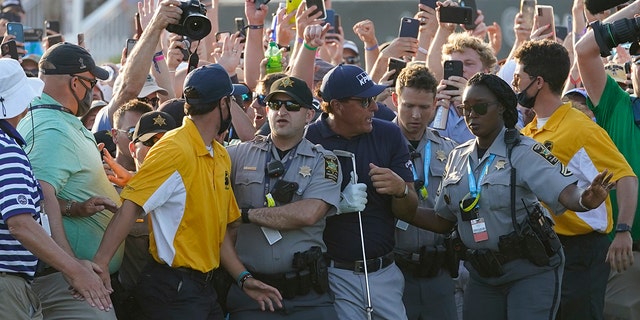 Phil Mickelson tries to get through the crowd during the final round at the PGA Championship golf tournament on the Ocean Course, Sunday, May 23, 2021, in Kiawah Island, S.C. (AP Photo/Matt York)

The runner-up finish for Louis Oosthuizen was his sixth career second-place in a major championship. Oosthuizen, who won the 2010 British Open, finished tied with Koepka at 4-under par, two shots behind Mickelson.

“Look, I feel like I’m playing my heart out to get a second major, and I do know I have the game to do it,’’ he said. “This was close. My game wasn’t great on the weekend. I just need to work harder on it to get myself in contention again. Another second place, I’ve got to take it. But I feel like I could have probably [gotten] two or three more shots out of my game.’’

Oosthuizen, who began the day two shots behind Mickelson, said of chasing him, “I tried to be as aggressive as I could without doing stupid things.’’

Rory McIlroy didn’t understand what all the fuss was about. He sensed expectations building for him as this week approached because he was coming off a win at the Wells Fargo two weeks before and he, too, won the PGA when it was last at Kiawah Island in 2012.

His week ended up being thoroughly disappointing, 5-over par after he shot an even-par 72 Sunday. He said afterward that he felt like he was “just sort of stuck in neutral.’’

“I didn’t understand those high expectations,’’ McIlroy said. “It was good to get a win at Quail Hollow, a course that I’ve always played well on and am comfortable on. But I said to you [reporters] on Tuesday I didn’t remember much of 2012. For whatever reason, it just wasn’t a very memorable week in many ways.

“I didn’t feel like playing well here nine years ago was going to automatically make me play well again, and I felt like coming in here there were still parts of my game that I needed to sharpen up. Obviously, those parts were exposed this week in the wind and on a tough course.’’

Defending PGA champion Collin Morikawa, who won at Harding Park last August, had a relatively quiet week trying to retain the Wanamaker Trophy, but he finished strong with a final-round, 4-under-par 68 Sunday to finish 1-under for the week. The 68 followed rounds of 75 and 74.

“I look back, and I pretty much forgot about Friday and Saturday,’’ Morikawa said. “It kind of sucks that those two days I played like that, but that’s golf, and you kind of learn. But it’s always nice to finish on a 68 in a major and just kind of use that momentum for the rest of the summer.’’

Morikawa conceded that he felt “a little extra weight’’ being the defending champion.

“People want to take the trophy from you,’’ he said. “I enjoy being in that position. You want to be in those positions because it shows that you’ve succeeded, you’ve played well the past year somewhere, at that course or whether it’s at a different course. So, I hope to keep defending. I hope to have more title defenses and all this stuff because it just means you’re doing something great.’’

The playing competition between Ryder Cup captains went to Europe’s Padraig Harrington, who had a strong week, finishing 2-under par for the week after closing with a 3-under-par 69 Sunday.

Steve Stricker, the U.S. captain, finished 4-over for the week.

“I’m very happy that I felt like I competed on a level with everybody else this week,’’ Harrington said. “Physically, tee-to-green, I played very well during the week. At 49 years of age, you don’t want to go out there and feel like you’re giving anything up.’’

Harrington called Sunday’s final round “probably my most enjoyable round of golf I’ve had on the golf course in a long time. For today at least, I’m back to being a golfer.’’

Harry Higgs, playing in his first career major championship, finished tied for fourth at 2-under par for the week, and that qualified him for the 2022 Masters.