The visitors absorbed a fair amount of pressure in both halves from the home side but were clinical going forward. 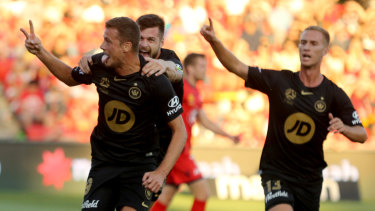 Roly Bonevacia was the Wanderers best, setting up the opener, scoring the second and supplying the assist for Wanderers' third.

Western Sydney made the perfect start, breaking the deadlock on 12 minutes thanks to a neat header from Oriol Riera.

The Spaniard made a darting run to the near post and nestled Bonevacia's free kick into the bottom corner.

A minute later and the Reds were awarded a penalty after the intervention of VAR but Craig Goodwin had his spot kick saved by Vedran Janjetovic after Jordy Thomassen was clipped by Brendan Hamill inside the area.

Adelaide wasted another opportunity to equalise just after the half-hour when Mirko Boland and George Blackwood got in each other's way when trying to connect with Isaias' free kick.

The Reds did manage to draw level just before the interval when Ryan Kitto powered home a volley from just inside the area.

The Wanderers sealed their fourth win of the season in the 71st minute when Bonevacia turned provider for Abraham Majok, who latched on to a lobbed pass and lifted the ball over the advancing Izzo.