THE world’s biggest clubs have spent millions trying to find the next Virgil van Dijk or Ruben Dias.

But there’s one non-league fan in north west England who could probably save them a quid or two. 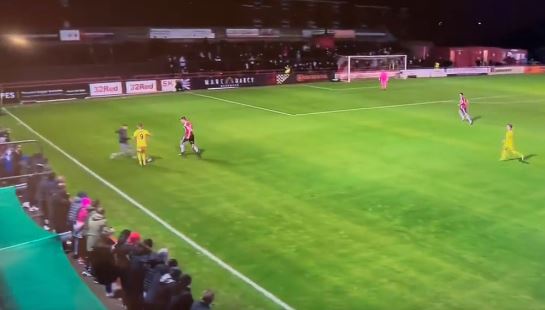 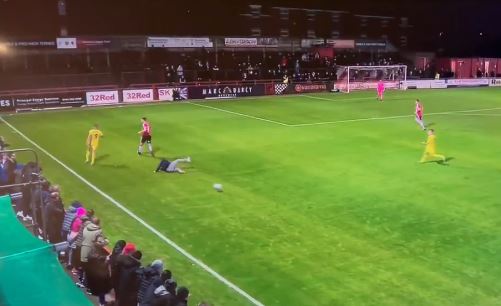 The supporter showed the art of tackling is alive and kicking in the Conference Premier League when he burst onto the pitch as Altrincham hosted Solihull.

The visitors were 2-1 up with a minute left when they regained possession through veteran striker Adam Rooney.

The 33-year-old headed for the corner flag as he aimed to run down the clock at Moss Lane.

But out of nowhere arrived a fan determined to stop the forward in his tracks.

In footage captured on BT Sport, the supporter legged it into view before sliding to clear the ball from a startled Rooney.

The ref quickly blew his whistle to bring a halt to proceedings but the fan leapt to his feet in order to win the second ball.

With the game stopped, the fan raised his arms aloft before wheeling away to celebrate in front of the bemused players.

Jokers were quick to react online as they asked if the lad was open to a transfer.

User ‘MatthewNewby’ wrote on Twitter: “Is he available on a free?”

Fan ‘joshfawdry added: “He’s won the ball for me here – nothing wrong with that.”

And ‘Rage_Alan’ wrote: “Better than any tackle I’ve ever done in my life that is.”

Opinion: Fan tries to do right by Colin Kaepernick with Hall of Fame nomination