Table tennis prodigy Connie Psihogios remembers dreams of representing Australia on the world stage playing in her head while watching her sport at the 2016 Olympics Games in Rio de Janeiro.

“I was like ‘gosh, wow, I wish I was there’,” 12-year-old Connie says on Thursday, a little over a year after she narrowly missed selection for the 2020 Tokyo Olympics, which have been postponed to 2021 because of the coronavirus pandemic.

Those dreams were sparked for Connie all over again earlier that morning, when the International Olympic Committee named Brisbane as the city it was talking to in “exclusive” discussions to host the 2032 Olympics. 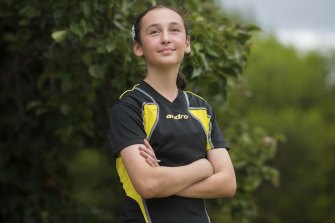 “It made me feel really happy and just really excited,” Connie, who plays at the Dandenong Table Tennis Centre in Melbourne’s south-east says. “I hope so if I train really hard, I think I can make it.”

Connie will be 24 by the time the 2032 games roll around, in what should be her athletic prime.

Although it’s highly likely it won’t be here first taste of the Olympics, with Paris set to host 2024 and Los Angeles the winning bidder for 2028.

“I lost in the second stage,” Connie says of qualifying for Tokyo.

“It would mean the world to me [to play in front of family and friends at a Brisbane Olympics].”

Having started playing table tennis aged seven, she went up against much older and more experienced players at the Olympic qualifiers in early 2020, like 29-year-old Melissa Tapper.

“For a girl who was only 10 at the time to even have the nerve to participate in an Olympic qualification tournament is truly remarkable,” Hinton says. “To then beat some of these players and progress to the final stage of qualification is nothing short of mind-boggling.”

Brisbane is the only bidder for the 2032 games, although Hungary, China, Germany, India, Indonesia and Russia were also working on potential bids.