ITV Racing is back on our screens again today with some brilliant action from Leopardstown and Newbury.

The action gets underway at 1pm on ITV4 and is on right through the afternoon until 4pm. 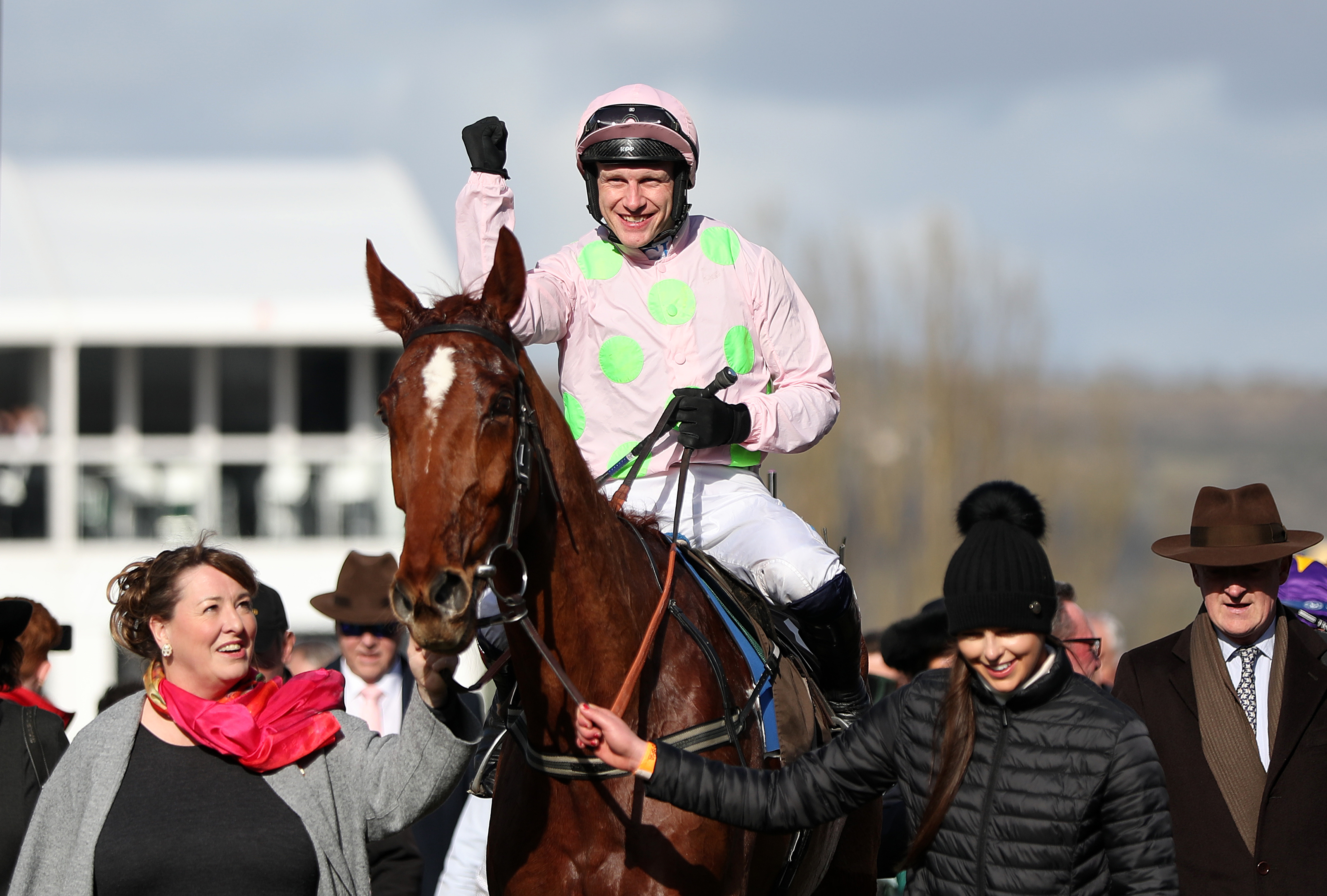 SunSport tipster Templegate has been through all the cards and brings you his top picks for the telly action today.

CONCERTISTA can maintain the Willie Mullins stranglehold on this race.

The Closutton king has taken the past four runnings and Paul Townend’s mount was impressive in taking a Fairyhouse Grade 2 last time on the back of her Cheltenham Festival success.

She relishes this trip and looks capable of improving further.

Black Tears was below par on comeback at Punchestown but a repeat of her Coral Cup second would put her in the picture.

It’s telling that her best efforts have come in big fields though. Mullins has other good chances with Bryan Cooper taking over on My Sister Sarah. She had ten lengths in hand when winning a Limerick Listed contest and has lots of stamina which should be an asset in these conditions.

Buildmeupbuttercup still makes the odd error but held on well in the mud last time. She may struggle to go the pace with some of these.

Minella Melody has a win in this grade on her CV and wasn’t disgraced behind Concertista last month. She needs to raise her game under Rachael Blackmore.

Mary Frances needed every yard of three miles to score at Clonmel but this is much hotter company.

MONKFISH looks hard to beat after his bloodless win on chasing debut at Fairyhouse last time out.

He signed off his hurdling career by winning the Grade 1 Albert Bartlett at the Cheltenham Festival and has translated that ability to the bigger obstacles. Stepping up to three miles is ideal and he’s at home on any ground.

Conflated was pretty impressive at Navan earlier this month. He wasn’t challenged on the front and ran right away from his rivals. This is a lot tougher but he’s another who should enjoy this stamina test.

Latest Exhibition was second to the tip at Cheltenham and has taken well to fences although he came up short in a Punchestown Grade 2 after a good debut win. It’s early days so there’s a lot more to come.

Eurobot has few miles on the clock and had 18 lengths in hand when scoring at Thurles after his main rival fell. It was still a smart performance and he has place claims for Noel Meade.

Heaven Help Us and Foxy Jacks look a fair bit short of this level. Both head here on the back of heavy defeats with plenty to prove.

ABACADABRAS won the Future Champions at this meeting last season before a heartbreaking second in the Supreme Novices’ Hurdle at the Cheltenham Festival.

He came back to beat Saint Roi at Punchestown by a neck, although he seemed to idle in front and could be value for further. He looks rock solid and won’t mind if there’s more rain.

Willie Mullins has a strong team with Saint Roi probably the pick, especially if he can iron out the odd mistake he can make. He should be capable of improvement.

Mullins’ Sharjah and Saldier are both proven Grade 1 performers too. The former won this race last season and was a cracking second to Epatante in the Champion Hurdle. That form speaks for itself but he has a long break to overcome.

Aspire Tower is the baby of the field and got the better of Abacadabras when they met at Down Royal in October. He doesn’t get quite as much weight today but doesn’t need much of a step forward to figure.

Petit Mouchouir makes his debut for Gordon Elliott with something to prove having not won for three years although he did win this in 2016.

LEGACY THOR is a quirky customer but he got his act together in fine style to win with lots in hand at Navan earlier this month.

He relished the soft ground there and wasn’t stopping at the end of 2m4f. The handicapper hasn’t gone crazy with his mark and he should run well again.

Gavin Cromwell has won the past two runnings of this so keep an eye out for a move on his Presenting Meghan who unseated last time but has shown promise before and has little weight.

Millen To One was a solid second at Fairyhouse latest and will enjoy these conditions. Gabbys Cross stuck his neck out to score at Punchestown earlier this month when enjoying this trip. He has more to offer on this handicap debut.

Slige Dala won a bumper at the Galway Festival and scored on hurdles debut at Listowel. He found life a bit tougher in a Listed contest at Limerick but should be happier in this company.

Premium Package went close at Listowel when last seen in September. He’s up 4lb for that third-placed effort and has more to come.

Jacksons Gold battled well to win in a small field at Thurles and is another with more to offer.

DEMACHINE has lived up to his name with two convincing wins since going over fences. He started by routing 17 rivals at Uttoxeter before stepping up in class to score at Ascot. He stays well and has a lot more to offer.

Sevarano is another with an unbeaten chase record. He was already going much the best when his main rival fell at Exeter last time and this longer trip should suit. Oliver Sherwood’s hope won’t mind if there’s more rain as he likes it heavy.

Dickie Diver is worth a market check coming back from almost two years off for Nicky Henderson. He was fourth in the Albert Bartlett at the Cheltenham Festival so has talent.

Earth Moor improved to score at Fontwell and could defy an 8lb rise in the weights given he had plenty in hand.

Equus Dancer has landed a couple of wins at Sedgefield so won’t lack for staying power. He drew well clear there last time and is on the upgrade.

Young Wolf has a bit more experience than most of these but he had to settle for second at Fakenham latest after making a bad mistake. This looks a tougher race and he has plenty of weight for what he’s achieved.

The last time CH’TIBELLO ran in a handicap he won the County Hurdle at the Cheltenham Festival.

He has been kept to Graded level since that success and was far from disgraced when beaten just over three lengths in the International last time. He has to give weight away but likes this trip and his class can see him home.

Nordic Combined was badly hampered when going well in decent company at Prestbury Park last time. He shapes like this trip will suit and should be in the mix again.

Calva D’Auge got the better of him when they met at Taunton last month and Angus Chelda takes a valuable 7lb off again which could make the difference.

Kateson ran his best race for a long time when winning a head-bobber at Aintree 24 days ago. He enjoyed the testing ground there so more rain would be a bonus.

The Cob is in cracking form and battled through the mud to land a narrow Haydock win. This looks a taller order but it’s early days and he looks capable of better.

Good Man Pair is probably better over fences but wasn’t beaten far at Taunton last time. Alan King’s horses continue to go well and his rider takes off a useful 5lb which could see him hit the frame.

NESTOR PARK ran well when a close second on his last visit here in November.

He ran well enough at Aintree last time and shapes as though stepping up to this longer distance will bring improvement.

Manofthemountain tried to keep up with Frodon at Cheltenham last time which wasn’t the wisest move.

He’s franked that form and Emma Lavelle’s hope was impressive when scoring at Bangor two runs ago.

He stays well his 3lb claiming rider has been on board for his past two wins.

Cuban Pete has landed two good victories in lesser races but jumped like a natural when scooting in at Hereford. There should be more to come and he doesn’t lack for staying power.

Get On The Yager has bottomless stamina and looked in need of his comeback at Wincanton earlier this month. He is tumbling down the weights now.

Coup De Pinceau ran his best race for a good while on debut for this yard at Ludlow latest. He stays well and the first-time visor could help.

Nigel Twiston-Davies is always respected in staying chases around here and his Redford Road is better than this distant third at Haydock. That was just his third spin over fences so he can build on that.

BRAVEMANSGAME caught the eye when winning over course and distance last time. He cruised through the race and left his rivals behind without getting out of second gear. He has his sights raised here but can cope with it and should rate a lot higher.

Wilde About Oscar is another going from strength to strength and he didn’t have to break sweat for a 16-length win at Aintree. He picked up well and is another with a bright future.

Does He Know already has a Grade 2 to his name after an impressive success in the Hyde Novices’ Hurdle at Cheltenham last month. That was his third success in a row and it won’t be easy to keep him out of the picture.

The Glancing Queen gets a handy 7lb allowance from the boys and she just breezed around Warwick when scoring on comeback. She sees out this distance well and is another with plenty more to offer.

The long shortlist also has to include Star Gate. He had just two rivals to beat at Sandown last time but he breezed through the testing ground for a facile success. He is another to watch in a race full of potential superstars.

SHANACOOLE PRINCE jumped like an old hand when finishing a close second at Southwell on his chasing debut. Kim Bailey’s hopeful was coming back from a year off so should be fitter today and improve plenty for the experience.

King D’Argent scored on his first crack over fences at Warwick 19 days ago. He went from the front there and jumped noticeably well. He steps up in class here but has a lot more to offer for the Skeltons.

Exelerator Express took a big step forward from his first spin over fences when a solid second at Wetherby last month. He takes a slight hike in distance here which should help as will soft ground.

Funambule Sivola got the better of him in Yorkshire but has since run well below that level when held at Sandown. Maybe the longer distance found him out there and he’s back in trip today.

Bridle Loanan had 17 lengths in hand when scoring at Fontwell and could cope with an 8lb hike in the weights. This company looks a fair bit stronger though.

Shut The Box took a step back from his debut when well beaten at Doncaster earlier this month but is another who should be happier at this distance.

Who is Sheikh Khaled bin Zayed Al Nehayan, what is his net worth and is he buying Derby County?

The Darts Show podcast with Phil Taylor: Rivalries, returns and how it all began

The FIVE most likely transfers to be completed in January with Chelsea, Everton and Tottenham tipped to do business