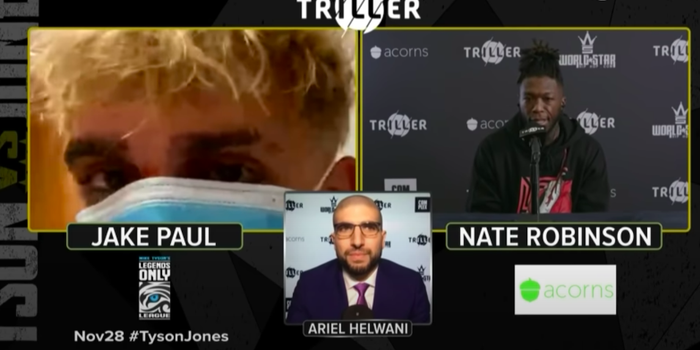 That's according to Robinson himself, who told Insider earlier this month that Paul acted like an unprofessional "asshole" when they were filming commercials ahead of their showdown Saturday.

Paul and Robinson compete in a legitimate six-round pro bout in the cruiserweight division, a fight which serves as the penultimate bout on a highly-anticipated Los Angeles event topped by Mike Tyson and Roy Jones Jr.'s exhibition.

Robinson told Insider that he's "pretty excited" at competing on the card, even though he hadn't even sparred until this year.

"I had a few scuffles in my NBA days, not really throwing fists but got into a couple of wrestling matches or a slap or two," he said.

"Male testosterone, men wanting to be the alpha-omega — tempers flare. Guys playing on the court, trying to win, guys talking a lot of trash, showing them up … it happens."

He told Insider it's a completely different fitness having to train for boxing, though.

"The first time I've ever been in a sparring match, it was just eye-opening for me how tired you get at the beginning.

"It was like, 'Wow, this is what Floyd Mayweather, Muhammad Ali, Mike Tyson go through?' You have to be in really good shape. That was the first thing, I knew I had to get in boxing shape.

"I could play basketball all day, football, run, and soccer, but being in boxing shape is way different. I knew I had to work on a lot, and get started, so I jumped right into it."

Jake Paul has been 'a goof' throughout the promotion, according to Robinson

Robinson, who makes his pro boxing debut this weekend, fights Paul, who is competing in his second pro bout having knocked out a fellow content creator AnEsonGib in his own debut earlier this year.

Prior to that, Paul had taken part in an unofficial, non-professional bout against Deji Olatunji, during the Logan Paul vs. KSI event 2019 which really spawned this bizarre new era of YouTubers-turned-boxers. Deji and Jake are KSI and Logan's brothers.

It is Jake, rather than his brother, who appears keen to take it to a new level, adhering to boxing-style training camps, taking on further fights, and telling Insider this week that he wants to organize boxing bouts against well-known UFC fighters.

Robinson said it's hard to assess how good or bad Paul actually is because "the guys he's been fighting are terrible."

But part of Paul's strategy appears to involve causing chaos, and Robinson said he's been unprofessional in the build-up to the weekend event to date.

After the virtual press conference which Insider attended earlier this month, Robinson told us that Paul was "being obnoxious and interrupted" him the whole time.

"He's not taking this seriously and is squandering the opportunity," Robinson said. "He wasn't saying much at the conference … it doesn't really matter.

"That's just him not being a professional, acting like Jake Paul. I'm not taking s— personal."

It wasn't even the first time Paul had acted up during an event they were at together, according to Robinson.

"We saw each other a couple weeks [before the virtual conference] and we came to LA to do promo for the fight.

"He came in, being loud, interrupting [me] doing commercials, and he was just being an asshole. Not cool. He started acting like he wanted a photo with me, but really, he's just being a goof.

"He calls me boring, that I don't talk enough s—, but I said I'll show him who I really am when we fight November 28."

The main card of the Tyson vs. Jones exhibition begins at 9 p.m. ET airing on cable provider pay-per-view, and online platforms Triller and Fite TV, and costs $49.99 to watch.

Craig Carton reveals he nearly killed himself: ‘Don’t do it!’

Rugby World Cup: Eddie Jones says his England Samurai warriors will fight to the death against Australia – The Sun