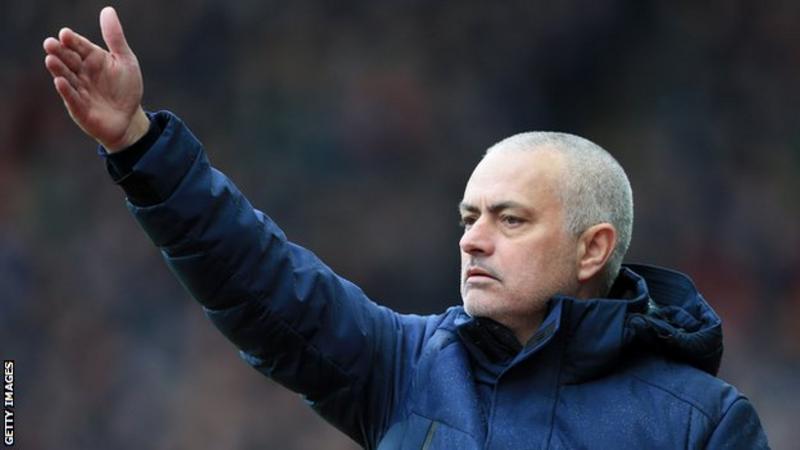 Tottenham boss Jose Mourinho says Manchester City deserve the “benefit of the doubt” over their two-season ban from European club competition until their appeal is heard.

City say they will appeal to the Court of Arbitration for Sport.

“At the end of the process we will see if they are punished or not,” Mourinho said.

“Uefa punished them but they have the chance to appeal. Until the appeal finishes I think Manchester City has the benefit of the doubt.”

Mourinho’s Spurs side climbed up to fifth in the Premier League with a last-minute 3-2 win at Aston Villa on Sunday.

It is not clear whether the team that finishes fifth this season will get a Champions League place if Manchester City’s ban is upheld for 2020/21.

“When we speak about fifth, Wolves, Sheffield [United], Manchester United, Arsenal and Everton look to the table and week after week say, ‘We can do it’ and they can,” Mourinho added.

“So it is going to be very hard. We have a big fight and you could see on Saturday, Liverpool was first versus last, and today with Villa fighting to stay in the division how difficult it was.”

Mikel Arteta, who was City boss Pep Guardiola’s assistant at the Etihad before becoming Arsenal manager, said the situation was “very difficult”.

But he added: “I’m not conflicted at all, I want the best or Manchester City, Pep and the players.

“I feel for them because I know they are suffering. The only thing I want for them is positive and good things.”

Arsenal are in 10th place, six points behind Tottenham, after their 4-0 win over Newcastle on Sunday.

If the example of Red Star Belgrade is any guide, the fifth-placed team in the Premier League could benefit should City be excluded from European competition.

Red Star were banned from the 2014-15 Champions League by Uefa for Financial Fair Play breaches. Partizan Belgrade, who finished second behind Red Star in the Serbian League, were elevated to the Champions League from the Europa League.

The Premier League has not commented on Friday’s Uefa decision, but its Financial Fair Play Rules are similar to Uefa’s, and City’s situation has been a topic of discussion among member clubs.

Should the Premier League decide to bring a charge against City, it can ask Uefa for permission to look at the evidence the European body has used.

Uefa imposed its penalty after City were found to have broken the rules by “overstating its sponsorship revenue in its accounts and in the break-even information submitted to Uefa between 2012 and 2016”.

Mourinho joked that that while he had little interest in following City’s case, it would be piqued if retrospective action led to Manchester United retrospectively being awarded the 2017-18 Premier League title.

That season, Mourinho’s United finished second, 19 points behind their neighbours, with the Portuguese manager previously saying it was “one of my greatest achievements”.

“I didn’t lose one single minute analysing what Uefa and Fifa have to analyse,” Mourinho said.

“If I got into that I have to ask if the team that finished second in 2018 is going to be champions? Yes or no?

“That would be interesting – but jokes apart, I just wait calmly. I don’t think about four or five, just do the best we can, [try to get] the most points we can, the best position we can.

“At the end of the season, we will see where we are because maybe we are sixth or seventh and then it doesn’t matter if fifth goes to the Champions League.”

Sen. Susan Collins wrote note to Chief Justice Roberts prior to his admonishing of Senators

Top 16 athletes over 35 of all-time: From Tom Brady to Serena Williams to Gordie Howe

European Darts Grand Prix in Sindelfingen rescheduled to May

Temporary changes in college sports may be needed due to coronavirus, athletic directors survey indicates