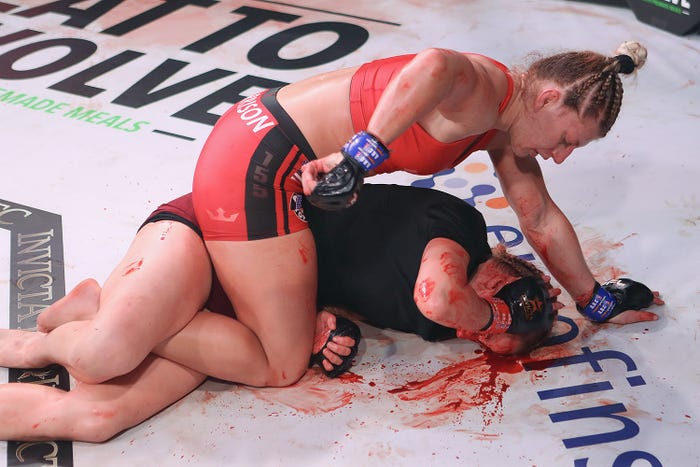 Kayla Harrison said she was surprised her bloody MMA bout wasn't stopped and did think to herself, "This is barbaric."

The lightweight fighter was on loan from the Professional Fighters League — a combat sports organization she was crowned champion in last year after winning a $1 million match — to Invicta FC, an all-women MMA company.

Because of the global outbreak of the coronavirus earlier in the year, the PFL postponed its entire 2020 season leaving its roster of athletes without dates to compete on.

Harrison agreed to a bout at Invicta 43 in Kansas City on Friday, and put her unbeaten record on the line in a featherweight fight against Courtney King.

Before long, the canvas was stained with her blood as Harrison opened an angry gash on the bridge of her opponent's nose.

"I was surprised by how much blood there was and that the doctor didn't stop it because I was literally slipping in blood," Harrison told TMZ Sports this week. "It was like a slip n' slide in there. It was disgusting!"

When Harrison rose to her feet after stopping King in the second round, she was wearing her opponent's blood on her fists, arms, and thigh.

It was even in her mouth, Harrison said.

"I licked my lips and I was like 'Oh God, I just tasted blood!' So gross! So gross!"

Harrison told TMZ that there are two sides to her, and though she understands the nature of combat sports can lead to cuts, bruises, and injuries, she still feels empathy for those she destroys.

"There's two Kaylas … there's the Kayla that's like, 'This is barbaric! Oh my god, I don't wanna punch her anymore … I don't wanna do this.'