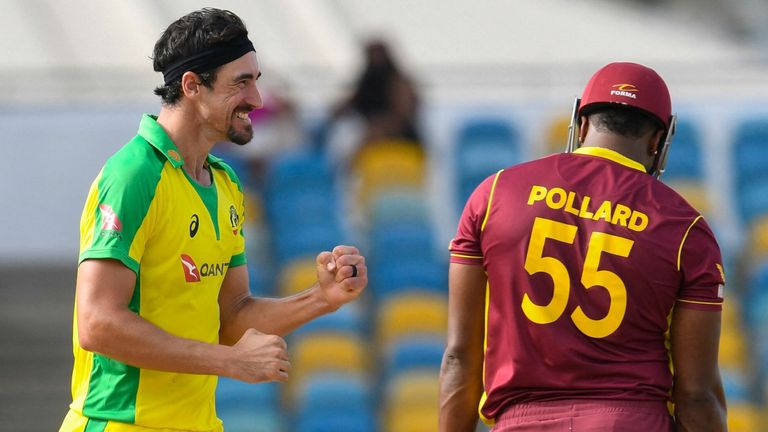 Australia handed the West Indies a six-wicket defeat to clinch a 2-1 one-day international series win and leave home captain Kieron Pollard criticising the quality of the pitch in Bridgetown.

The Australians cruised past their modest target of 153 runs with just over 19 overs remaining as Matthew Wade top-scored for the tourists with 51 not out, ensuring stand-in captain Alex Carey – in charge due to Aaron Finch being sidelined with a knee injury – led the team to a series victory.

“I think both teams struggled on the pitch and I think that’s unacceptable for international cricket,” said Pollard, whose men were bowled out with more than four overs remaining.

“We’re not going to make excuses. We accept that we batted badly but I don’t think the scores that we have gotten in this three-match series, with two top international teams… I think that’s very embarrassing for us as a people.”

Evin Lewis (55) was the only West Indies batsman to pass 18.

Opener Lewis had temporarily been forced from the field having played a ball from Hazlewood onto his own helmet with the West Indies at 14-0.

By the time he returned following Pollard’s dismissal, the hosts were 71-5 and although Lewis continued to offer resistance, West Indies were all out for 152.

Matthew Wade reflects on a tense battle with Kieron Pollard and admits it could turn out to be his final ODI! 👊 #WIvAUS pic.twitter.com/vRaVOreAje

That total caused the Australians few problems, with Carey (35) steadying his team after the early loss of Moises Henriques (10) and Josh Philippe (1) before Wade, Mitch Marsh (29) and Agar (19no) led the tourists to victory.

Carey said: “Personally and collectively it’s really exciting, It’s tough to leave home during a pandemic and the commitment that this group has shown, it’s fantastic to see a result go our way.

“I thought the bowlers did a great job. I think there were some good innings throughout the series.”