Kirk Herbstreit, who is a star college football analyst for ESPN’s “College GameDay,” recently released a book called “Out of the Pocket,” where he talks about his love for football, his playing days in high school and at Ohio State as a captain, and his relationship with his father, Jim, who battled Alzheimer’s disease until his death in 2016.

Herbstreit caught up with Fox News earlier this week and discussed his new book, as well as a handful of other topics, including the upcoming college football season, name, image and likeness, and the latest crop of quarterbacks to be drafted into the NFL. 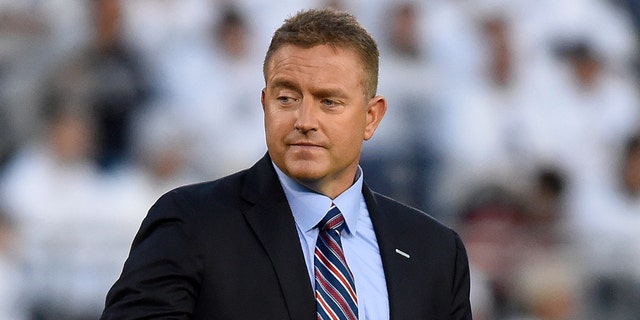 Fox News: What are your thoughts on the NIL? Are you surprised about how the money is being thrown around to these college athletes?

Kirk Herbstreit: I was open to it. I wasn’t like, “About time.” But I was like, “OK, let’s see how this goes. Let’s see how this changes things.” And I heard all of the crazy stories like how Alabama’s quarterback is going to get a million dollars, and he hasn’t taken a snap. And you’re wondering what it’s going to do to a locker room when some guys are making millions of dollars, and other guys are making nothing. But I haven’t talked about it, I just want to watch to see how it unfolds. I was on a seminar the other day on Zoom and ESPN put up a graphic and they said there have been about 1,900 different name, image, and likenesses up until this point, and the average is about $923. And so, to me, not having money growing up, $923 to tweet out a few things or put something up on Snapchat? Count me in. That’s pretty good. But I don’t think at this point it’s as drastic as everybody feared. And the other thing is 53% of these name, image, and likenesses so far are outside of football and men’s basketball. A lot of them are from women’s sports, where they have a big social media following, and they are tweeting things out or putting something up on Instagram. But we’ll see how much it changes and what it ultimately does to the game. But I’m just kind of observing and kind of taking notes and see where it leads us in the next year or two.

Fox News: What do you think of Quinn Ewers skipping out on his senior year of high school?

Kirk Herbstreit: That’s garbage. In Quinn’s case, the state of Texas wouldn’t allow him to do name, image, and likeness as a high school player. I don’t think he was jonesing to get out of his senior year. I think it was more about having some huge opportunities… I’m guessing these states are going to have to catch up on the new rules and laws that are out there… I’ve never seen a generation of kids in such a rush to get to the NFL. And what’s funny is, every NFL player you talk to, they’re all dreaming of just going back one more game to play for their college. And these college kids are trying to sprint in three years to get to the NFL and they are missing out on so much as far as what the college game has to offer them… These guys are making money in the NFL, but they come back to college and they are like gods for the rest of their lives no matter what their NFL careers do. They will always be able to go back to their schools because of the roots that they created and the relationships they created, and they will always be looked at and appreciated for the players and the people most importantly that they are. And I think too many guys are just in a rush to not meet people and not build those relationships. With Quinn, I understand it. I guess logically he has opportunities and the state wouldn’t allow it. But man, don’t skip your senior year. It’s like one of the best years of your life. And you don’t want to bail on your senior year and leave your buddies. It’s hard enough to leave them after your senior year, let alone leaving them after your junior year. 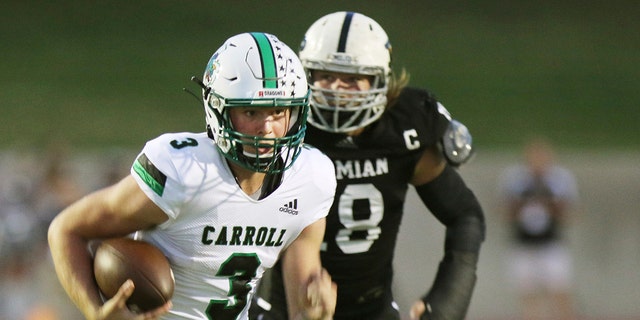 Under Pressure, Southlake Carroll’s quarterback, Sophomore Quinn Ewers (3) runs the ball for a first down in the first quarter in their game against the Permian Panthers Friday night in Odessa Texas on Sept. 13, 2019.
(Ben Powell/Odessa American via AP)

The second that athletes think that they are bigger than the brand, is the second that they get replaced by the next hot-shot five-star player. I just think the players need to have perspective on who they are, be appreciative, be humble… If you’re going to max out and make some money, go for it. I think it’s great. But chill. Enjoy the experience. Two percent of these dudes make it to the NFL. So you’re talking about 98% of college football players, don’t step onto an NFL field. And we’re acting as if 98% of them, make it to the NFL, and 2% don’t… Go do what you need to do with your name, image, and likeness, but in the meantime, let’s learn a little bit about life. So when you’re done with football, you can be successful in life, and not just shooting all of your eggs in one basket.

Fox News: Who are some under-the-radar college football players heading into the 2021 season?

Kirk Herbstreit: I think there’s a couple of guys. I would say Brock Purdy at Iowa State has a chance to have a magical year. He’s played and he’s been around for a little while. But Malik Willis would be a name to look out for. He’s a quarterback at Liberty. He left Auburn and things weren’t working out. He had a monster year last year. I think this year he’s going to be a little bit more under the radar. By the time the NFL Draft comes around, he could be a first-round pick. He has that Trey Lance vibe to him. Desmond Ridder has been around doing things for the University of Cincinnati. There’s one more guy Grayson McCall from Coastal Carolina who’s off the radar as well. 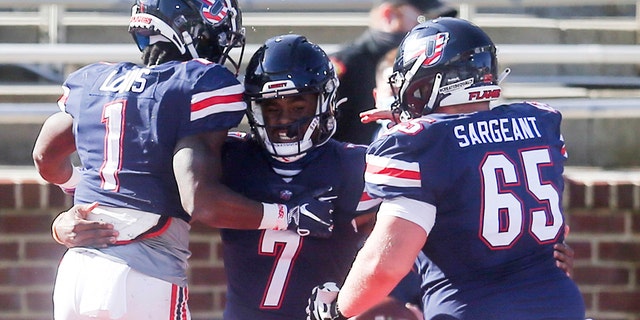 Liberty quarterback Malik Willis (7) celebrates his touchdown with his teammates during the first half of an NCAA football game on Saturday, Nov. 14, 2020, in Lynchburg, Va. (AP Photo/Shaban Athuman)

Fox News: Out of the five quarterbacks taken in the 2021 NFL Draft in the first round, who do you like most?

Kirk Herbstreit: The percentages say that only two out of those five are going to make it. If you just go by the last 10 years of the draft, and you look at first-round draft picks, you’d be surprised at how few guys end up making it.

If you go through them all, of all the guys who came out, Mac Jones’ ability to process, read coverage quickly, and make a decision on where the ball needs to go and then throw it accurately, he’s as good as you’re going to find. He needs experience and reps within his NFL system, but you look at Josh McDaniels and what he’s done with NFL quarterbacks, that could be a good fit… If he gets an opportunity, he’s one that may surprise people.

It’s easy for me to look at these guys and say, ‘Man, Zach Wilson how can he not make it?’ He looks awesome. There’s a lot to like about that kid. Trey Lance is in a really good situation, with Kyle Shanahan, who is with one of the most innovative play-callers, and he’s a really talented guy. There’s a lot to like there. Trevor Lawrence, we don’t know. I remember Troy Aikman with the Dallas Cowboys went 1-15 and Peyton Manning broke a record for the most interceptions ever thrown by an NFL quarterback as a rookie. Are they going to put some pieces around him to make that franchise better? There’s a lot to like about Trevor, but man that’s a tough situation. 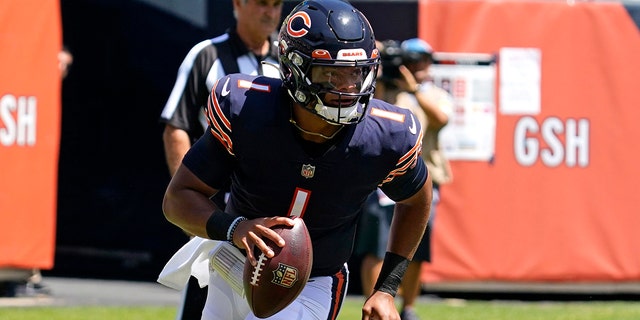 Chicago Bears quarterback Justin Fields runs with the ball during the first half of an NFL preseason football game against the Miami Dolphins in Chicago, Saturday, Aug. 14, 2021.
(AP Photo/Nam Y. Huh)

I think the guy that can really surprise people. He’s a guy who was dropping leading up to the draft and that was Justin Fields. There were a lot of rumors about his work ethic and how committed he is. I’m sitting there thinking that I know this kid on a personal level. He’s the opposite of that. There’s not a bigger competitor and a bigger guy who plays with a chip on his shoulder than Justin Fields. He’s got all the ability in the world to throw, to create, to run… The players love him, his teammates love him. He’s in a great market in Chicago. They are desperate for a franchise quarterback… I can’t remember the last quarterback they had that made you feel like they are in good shape. Now, in my opinion, they have it. Justin Fields is going to have a chance to be a superstar.

Fox News: Who are your Heisman Trophy hopefuls this upcoming season?

Kirk Herbstreit: What I learned about the Heisman. If you’re sitting here in August trying to figure out who’s going to win it. And I know last year DeVonta Smith came out of nowhere and won it, which was unusual. But it’s almost always the quarterback on a team that’s going to finish in the top five in the country. So with that in mind, Spencer Rattler from Oklahoma is a guy who is going to have a legitimate shot to have a run. I think the kid at North Carolina. You’re going to hear a lot about Sam Howell. He had a great year last year. I would expect him to put up big numbers. Clemson is always going to have a quarterback that’s worthy of consideration and this year will probably be no different. If you’re trying to look for guys that are a little bit different, taking a little long shot on them just based on the school’s tradition of winning. I would say C.J. Stroud at Ohio State has a chance to be a surprise. And I would say Bryce Young at Alabama. I would put him up there in my top five as definitely a guy to look out for.